Something old, something…older: Once On This Island and Twelfth Night

Re-visit with me, if you will, some of the comments I made in reviews of “Once On This Island” in Ocean Grove in 2004 (“…undistinguished, although pleasant enough”) and at Paper Mill Playhouse in 2012 (“…more a whimper than a bang”). The current Broadway revival at Circle in the Square, is indeed distinguished, and the only whimpers are in the audience as certain emotional scenes unfold. Directed by Michael Arden, the show has charm, verve and passion to spare. Not that it is over-the-top by any means; it is, in fact, a perfect blend of fantasy, romance and pathos: thoroughly satisfying in every way.

In its way, “Once On This Island is also timely – even more so, perhaps, than when it opened off-Broadway in May 1990, transferring later that year to Broadway, where it ran over a year and was nominated for eight Tony Awards, winning none, alas, against that season’s juggernaut, “The Will Rogers Follies” (unlikely to be revived anytime soon). The deceptively simple theme, couched in a mystical tale of forbidden romance, is grounded in class and racial distinctions. The material by Lynn Ahrens (book & lyrics) and Stephen Flaherty (music) is of a piece, varying seamlessly from Caribbean tempos to haunting ballads.

Set on a French Antilles island “then & now,” the story is a fable told to calm a young girl during a storm, about just such a girl, Ti Moune, plucked from just such a storm by the gods and sheltered in a tree. In as smooth a transition as ever staged, the girl, played alternately by two pre-teens, morphs into grown-up peasant-class Ti Moune (Hailey Kilgore), and the story is enacted.

Ti Moune rescues Daniel (Isaac Powell), the mulatto son of a wealthy landowner, after he has been hurt in an automobile accident. (Pausing here to laud Camille A. Brown, whose thrilling ensemble choreography is matched by innovative imagery, none more creative than Daniel’s vehicular mishap.) Ti Moune, convinced that her burgeoning love for Daniel can conquer death, makes a pact with the gods: her life for his. Eventually he is healed, and after an idyllic re-hab relationship, he rejects her love in favor of a more suitable union within his own moneyed status. Heartbroken, Ti Moune turns to the gods, who grant her eternal life by turning her into a tree.

Most of the cast, nearly all actors of color, play multiple characters, including the Caucasians. Donning crisp white shirts establishes the transition, and assuming crisp white attitudes brings it into focus. Lovely Ms. Kilgore embraces Ti Moune’s passion and her eventual anguish, and she sings like a dream. “Waiting for Life” is every young woman’s coming-out anthem.

Kenita R. Miller and Philip Boykin are both wonderful as Ti Moune’s parents, who cannot dim her passions or shield her from the outside world. “Pray,” they sing with their daughter over the inert Daniel; it is heart-rending and heart–warming all at once. Among the others in the perfectly meshed ensemble cast, Lea Salonga appears as a protective goddess (even as her breakout “Miss Saigon” is playing up the block).

Knowing the story and its resolution does not detract a whit from enjoyment of and immersion in the production. From the pre-show interlude with islanders socializing along the shore (complete with livestock), through various locations that seem as real as if constructed on Dane Laffrey’s realistic sandy set, up to the emotionally satisfying conclusion, the story holds one rapt. It’s the quickest ninety-minutes on Broadway.

If it ain’t broke, don’t fix it. Take, for example, Shakespeare’s “Twelfth Night, or What You Will.” Despite that sub-title (the Bard’s only one) and their own suggestive moniker, Fiasco Theater Company does not monkey with “Twelfth Night,” beyond casual modern dress and plugging in a couple of tunes. The Fiasco collective, born from the Brown University/Trinity Theatre MFA acting program, instead plumbs the play’s comedy, romance and yes, some drama, without artifice. With a firm grasp of the playwright’s characters, story and language, the result is a straightforward, eminently accessible “Twelfth Night,” which is praise, in case you have any doubt. 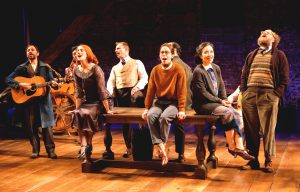 Co-directed by Noah Brody and Ben Steinfeld, who also appear as Duke Orsino and clown-commentator Feste respectively, Fiasco’s “Twelfth Night” takes the opening line, If music be the food of love, play on, and runs with it.

Shipwrecked on the shores of Illyria, twins Viola (Emily Young) and Sebastian (Javier Ignacio) each believe the other lost at sea. The ensuing intricately-crafted story of mis-directed and unrequited love has Duke Orsino (Brody) pining for Countess Olivia (Jessie Austrian), who falls for Orsino’s messenger Cesario, who is really Viola in disguise, who yearns after Orsino. Into the mix plops Sebastian, who, after machinations both antic and romantic, ends up with Olivia.

Ms. Young does not over-do Viola’s Cesario impersonation; the text does the job without swagger. All the other characters who come in contact with her (um, him) buy it – and that’s what counts. About another “Twelfth Night” where the twins did not look much alike (they don’t here either), someone scoffed: “How can [the other characters] not tell them apart,” he said. “They can’t,” I told him, “because Shakespeare says they can’t.” That’s good enough for me.