“The Parisian Woman” in D.C. (via B’way) and another tomorrow for “Annie” in NJ

I couldn’t find an English translation of Henry Becque’s 19th-Century farce La Parisienne, upon which Beau Willimon based “The Parisian Woman,” but it’s a safe assumption that the original did not include references to the U.S. Fourth District Federal Court bench or to Twitter accounts or to “fake news.” (Although that last one…who knows?)

Willimon’s modernist (and presumably loose) adaptation has been revised even since its 2013 premiere at California’s South Coast Repertory, and could possibly be up-dated again next week, depending on the news cycle. Regardless of any further tinkering, it will remain worth seeing, not least for the presence of Uma Thurman, making her Broadway debut as Chloe, the wife of a Washington D.C. tax attorney short-listed for the vacant Fourth District judgeship. Ms. Thurman is on stage throughout all five scenes of the 90-minute one-act, as dominant to the play as Chloe is to the situation. Even just sitting upstage listening to a conversation, Thurman’s Chloe exudes the confident craftiness upon which the story revolves. 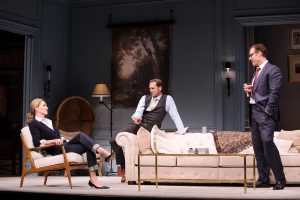 Uma Thurman, Josh Lucas (with drink) and Marton Csokas in “The Parisian Woman”

About that story, only bare bones can be revealed without spoilers. Chloe and Tom (Josh Lucas), not quite Beltway insiders themselves, are close to two people with influence on top-level decision-makers (think Oval Office) who can help to secure Tom’s appointment: Peter (Marton Csokas) is a Presidential advisor, and Jeanette (Blair Brown) is the incoming Federal Reserve Chairman (Chairwoman, Chloe corrects).  Both are major donors to the Republican National Committee, an affiliation not embraced by Jeanette’s daughter Rebecca (Phillipa Soo). 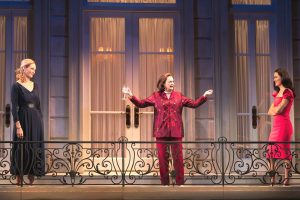 “The Parisian Woman” unfolds in now-time. Not theatrical ‘real time,’ but over several days and encounters that conjure up the “ripped from today’s headlines” cliché. Some of those headlines are spoon-fed in projections that separate the scenes, but the play is not that simple. Its sentiments are decidedly leftist, but one of the ways that aspect is presented is uniquely nuanced…and not altogether honorably even for those who agree. (Judging by bursts of laughter and applause, audience members who may be dismayed by the Liberal slant will likely be outnumbered on West 44th Street.)

Willimon’s script, which I did obtain, doesn’t read as well-crafted as it plays. Much of the dialogue is clipped, with few speeches running more than a couple sentences, but Pam McKinnon proves herself an actors’ director. Significant plot points and relationship subtleties are framed in glances and pauses, a technique at which the three women are particularly adept. In pursuing her goal, for example, Chloe adjusts her manner with each of the others; you hardly notice Ms. Thurman doing that…until it works. 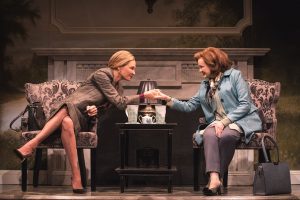 As Jeanette, Ms. Brown is brash, not blowsy; and funny, not comical. Her reaction to some surprising news speaks volumes without being overdone. Ms. Soo, Tony-nominated as Eliza in “Hamilton” (and, earlier, delightful in Moliere’s “School for Wives” at Two River Theater in NJ), enacts clear-eyed, ambitious, Harvard Law grad Rebecca without sacrificing her wistful youthfulness.

Both men are fine as well, although their roles border on the functional. They are witnesses to and objects of the action (Chloe’s, wouldn’t you know), rather than precipitators of it. Mr. Lucas does have his moment when Tom comes clean with his intent, but Mr. Csokas struck me as an odd casting choice for Peter.

Significantly, no one mentions the name of the President of the United States, until someone finally does, equally significantly.

There are a couple of surprise reveals, one of which, a beaut, sparks the resolution. Thinking back, there were a few “oh yeah, that” clues along the way, so if you see “The Parisian Woman,” pay attention.

[The title is from the old Becque play, but the reference here is to Chloe’s reverie about her years-ago tryst in Paris. Uma Thurman lives it for us.]

It’s been a week since I saw “Annie” at Paper Mill Playhouse, and I cannot get the tune of “NYC” out of my head. That number, as well as “Easy Street,” “Hard Knock Life” and “You’re Never Fully Dressed Without a Smile” are performed with spirit and energy by the principals and ensembles (both childrens’ and adults’) in the latest re-staging of the oft-revived musical. The fact that “Annie” features seven little-girl orphans (Annie plus six) and that the last few scenes take place around a Christmas tree make the musical play an obvious holiday-month offering. (Broadway’s last revival, in 2012, opened in November, as did Paper Mill’s last one, in 2002.) And oh yes, the mega-song “Tomorrow” still makes mincemeat of the fourth wall. That, and a real-live dog in the mix, cements the appeal.

While Paper Mill does not add or extract anything new from the seemingly ubiquitous show, there are plenty pluses: Tony Award-winner Beth Leavel is a terrific Miss Hannigan, who does not overdo the character’s boozing (thank you, Ms. L and director Mark S. Hoebee); Broadway veteran Christopher Sieber  balances Oliver “Daddy” Warbucks’ gruffness and tenderness perfectly; and Cassidy Pry, the pert Annie I saw (two girls alternate), brings perfect pitch to her songs and a blessedly un-saccharine quality to her scenes with the adults. 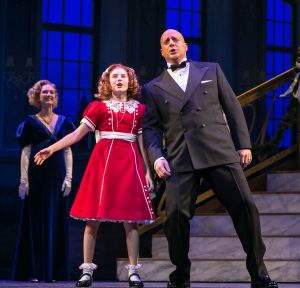 Charles Strouse’s musical score holds up very well, but Thomas Meehan’s book and some of Martin Charnin’s lyrics, are, by now, creaky. The appearances by FDR and members of his cabinet (Cordell Hull? Harold Ickes?) sail over the heads even of many grown-ups, and other 1930s references – Annie playing tennis with Don Budge, for one – were obscure decades ago. The “We’d Like to Thank You” number is performed very well by the homeless Depression-era chorale, but it is, after all, still about Herbert Hoover.

Young first-timers will appreciate the orphans’ scenes and the musical numbers, and a parent-child live-theater bonding can be very special. Really, though, “Annie” is a better fit for a grandparent-grandchild outing, as it’s been for me with Carolina, then eight, on Broadway in 2012 and with ten-year-old Sam last week at Paper Mill Playhouse. 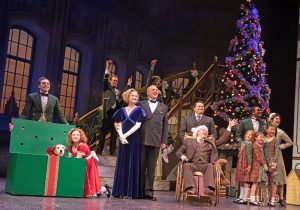 Through December 31 at Paper Mill in Millburn, NJ. Performances Tues-Sun with added  matinees during the pre- and post-Christmas weeks. For schedule and ticket info: 973-376-4343 or online at www.papermill.org