Selected by NJPAC’s Stage Exchange as one of 30 plays by New Jersey playwrights to be produced at in-state venues, Monmouth University adjunct professor of playwriting Joel Stone’s “The Calling” is world premiering through February 4 at New Jersey Repertory Company in Long Branch. Set in the nave of a Catholic church, it occurred to me even before the play began that an apt sub-title might be “A View from the Altar,” so authentic is designer Jessica Parks’ set.

That musing aside, the one-act two-hander opens with Father Dan (Ames Adamson) discovering a man sleeping in one of the pews, where he had lingered after Mrs. Callahan’s funeral mass.

At first wary of the stranger (“…we don’t keep cash on the premises…”), Father Dan relaxes when Carl (Jared Michael Delaney) reveals scrubs under his jacket, informing Dan that he is a nurse. Aha, I figured; the play will deal with the timely topic of male nurses in that heretofore female-dominated profession. I was mistaken. (The gender issue is not even mentioned, which may be even timelier.)

Soon enough, Carl makes a reference to the Catholic clergy’s sex-abuse scandals. Aha #2: so that would be the topic, I (and surely the rest of the audience) assumed. Wrong again. Finally, Carl tells why he had stayed after the funeral service, but, wouldn’t you know it: he’s lying about his intentions. We still don’t know. And as if the foregoing isn’t frustrating enough, even after a distasteful truth emerges, yet another underlying motive bubbles up.

The red herrings and shifting suspicions are both the strength and the weakness of Stone’s play. We’re intrigued by the by-play between the two men, as Father Dan becomes more and more interested in his interloper, but the technique requires too much exposition, some of it re-hashed, with each revelation. 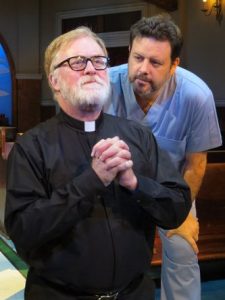 Questions abound: Had the two men ever met before? What, if any, was Carl’s relationship with the deceased Mrs. Callahan, and why had he attended her funeral? What are his intentions toward Father Dan? Those and other factual questions are pretty well answered.

More interesting are some philosophical and liturgical questions: Are there degrees of Faith? Divergent but equally valid interpretations? What are a priest’s obligations to a worshiper or confessor? And just how sacrosanct is the confessional – even when a priest knows of or strongly suspects the likelihood of further grievously sinful acts. These issues are randomly addressed and not really resolved (can they ever be?), which might be the playwright’s intent, but paraphrasing those issues several times over? “Get on with it,” I thought more than once.

Those points made about the play, it’s hard to imagine it better acted or directed. Adamson and Delaney are as much different types as are their characters, but their rapport – chemistry, if you will – is established early and maintained throughout. It takes a while for Father Dan and Carl to communicate effectively, but even that awkwardness is well acted. The director of a two-character play is fully one-third of the equation; Evan Bergman’s guidance is consistently creative and on-target.

Toward the end, Carl interrupts Father Dan’s lengthy discourse on why he chose his vocation. “Are you sure this isn’t the plot of an old movie?” he asks the priest. That line, I thought, is either a mark of courage by the playwright – or a challenge to a reviewer. The benefit of the doubt here goes to Mr. Stone. He’s hardly a rookie, but this is his first full-length play after 44 years of writing shorter one-acts. He’d do well to pare this one down a bit, but “The Calling,” as it stands and however flawed, is nonetheless worthy of NJPAC (and NJ REP)’s selection.