And here’s a list of who should see it at Westchester Broadway Theatre before it closes there on April 1: All of the above.

It had been a while since my last “A Chorus Line.” The 2006 Broadway production was more an attempt at re-creation than a revival: faithful but somewhat mechanical. WBT’s is a fresh revival (oxymoron noted), a vibrant rendering of the 1975 musical that not only took Broadway by storm, but that also altered the face of the American musical. No history lesson here, but when’s the last time you saw separate singing and dancing ensembles? Try to get a gig now at any level if you can’t do both. (And, oh yeah, act.) 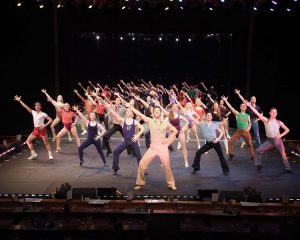 “A Chorus Line” won nine Tony Awards – and the Pulitzer Prize for Drama. Director-choreographer Michael Bennett’s crowning achievement, it has a life of its own, inspiring  performers and audiences alike. While it deals with a particular theatrical group, Bennett himself saw it as a “metaphor for life.” On a bare stage, auditions are being held for a new Broadway musical, and if you’ve ever waited anxiously for a stranger’s approval, you will identify with these hopeful hoofers. Their ambitions, fears and frustrations are palpable. The interviewer, Zach, is largely unseen as he grills the performers, so you are free to substitute whatever authority figure you care to. 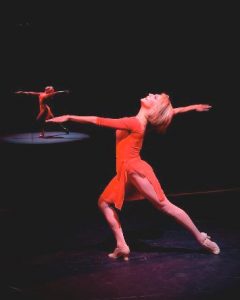 As Cassie, Erica Mansfield dances “The Music and the Mirror”

Significantly, the show never became a star vehicle. Some of the roles are more pointed than others, and Donna McKechnie made a name playing former leading-player Cassie, for whom a chorus job is a come-down to some, but not to her. It is truly an ensemble piece, never more than at Westchester. Erica Mansfield’s Cassie stands out and blends in all at once. “Play me the music,” she sings, dancing beautifully before the mirrors that line the upstage wall periodically. (Steve Loftus’s minimal set design evokes the original, as does Andrew Gmoser’s very effective lighting.) 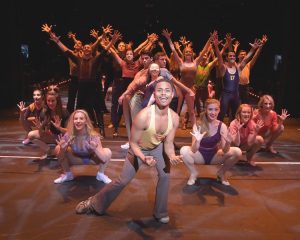 One by one, the aspirants exhibit their talents, as in Mike’s (Drew Carr) “I Can Do That” and some of their other assets, as Emma Degerstedt demonstrates in Val’s paean to body-parts enhancement, “Dance Ten, Looks Three.” Other numbers reveal the inner thoughts and emotional baggage of the “boys and girls” (show-biz lingo – still). Sheila (Lauren Sprague), Bebe (Caitlin Wilayto) and Maggie (Emily Kelly) work “At The Ballet” into the rafters – and into your heart. Diana (Alexandra Matteo) leads the cast into the show’s standalone hit “What I Did For Love.” For every performer and number I have mentioned, there are a couple more just as gripping, as agile, as heart-grabbing, as amusing. 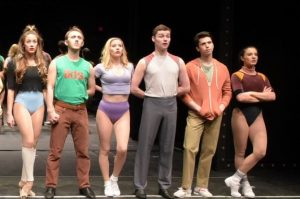 James Kirkwood and Nicholas Dante’s book, Marvin Hamlish’s music and Edward Kleban’s “A Chorus Line” lyrics blend in a rare symbiosis that still resonates 40-plus years later. (After learning in a posthumous show about Kleban that they added the article “A” to the title in order to be first in the New York Times alphabetical listings, I never omit it.)

As with most Broadway musicals and plays, the production rights specify no cuts, edits, ad libs (please, folks) or other adjustments to the piece. The “A Chorus Line” restrictions extend to not inserting an intermission (it’s a fleet two hours), no costume adjustments, and adherence to much of Bennett’s original staging and choreography, which is not to suggest that doing so is a piece of cake. Here, director/choreographer Mark Martino (and associate choreographer Brian Dillon) put their own stamp on the iconic staging.

A notable exception to the no-tinkering restriction, as related to me by a WBT insider, is the deletion of the year of birth in the scene where the dancers are asked their ages. In 1980, for example, saying you were born in 1958 made you twenty-two. Now they can just say “I’m twenty-two,” erasing any out-datedness. Whether you are 22 or 82, “A Chorus Line” is of, by and for your era. See it and you’ll agree. 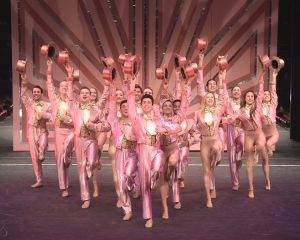 The photo says it all…

Westchester Broadway is, btw, a Dinner Theatre venue and one that restores culinary honor to that long-maligned entertainment combo. The three-course dinner menu, served about an hour before curtain time, includes choice of eight entrees, all with wine pairings noted…at a reasonable package price (see below). You can opt just for the show – “A Chorus Line” is worthwhile on its own – but you gotta eat somewhere first, right?

Through April 1 at WBT, 1 Broadway Plaza, Elmsfiord New York – fifteen minutes from the Westchester side of the Tappan Zee Bridge. Thurs. – Sat. evenings with weekend and some weekday (luncheon) matinees. For schedule, directions and reservations ($59 – $89 with meal): 914-592-2222 or at www.broadwaytheatre.com

For the 5000th Broadway performance of “A Chorus Line” on Monday, August 10, 1987, nineteen members of out-of-town productions appeared on stage in the finalé next to their corresponding characters. The 19 were chosen from cast members who had performed in any United States production, including amateur and stock. The winners were flown (with a guest) to New York for five days. I was at that 5000th performance. In the front row. Recalling that, thirty years later, still gives me a chill. 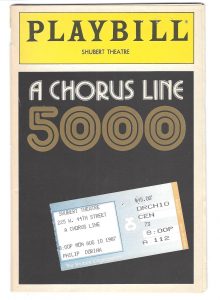