Write what you know, the saying goes. Playwright Matt Barbot and director José Zayas both credit their Hispanic heritage with having inspired their collaboration on “El Coquí Espectacular and the Bottle of Doom.” After being showcased at Two River Theater’s Crossing Borders New Latino Plays festival, Barbot’s play, directed by Zayas, is premiering in a full production at Two River through February 4.

The play is about the creation of comic book character El Coquí Espectacular by an aspiring Brooklynite cartoonist of Puerto Rican descent – a Nuyorican, as that ethnicity is known. El Coquí will be the first Latino super hero, and having committed him to comic-book panels, writer/artist Alex (Bradley James Tejeda) ventures out into the dark of night dressed as his alter ego, not exactly in search of burglaries in progress or damsels in distress. “I thought it would help to get inside the character,” says Alex. 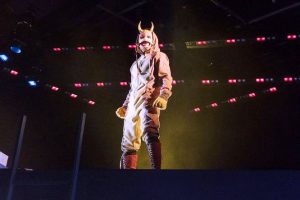 [The coqui is a singing tree frog native to Puerto Rico, so named for the sound of the male’s call. From such humble origins do super heroes emerge…at least this one.]

Alex’s awkward (intentionally so) impersonation as the coqui-masked super hero is at the heart of “El Coquí Espectacular and the Bottle of Doom.” The play is essentially a live-action cartoon, with periodic reality checks that illustrate how diversity and acceptance of Latino culture remain as much a fantasy as a caped crusader. The point is well made, by inference and example and with humor. (The playwright is less subtle elsewhere: something is “racist but we’re not supposed to say racist,” or “capitalism ruins everything good.”)

There’s a message, yes, but “El Coquí” is anything but stuffy. Staged in Two River’s versatile Marion Huber Theater, the production is as colorful and action-packed as…well, as a super-hero comic. Alex is spotted by Jessica-with-a-Y (and one s) Yesica (Flor De Liz Perez), a free-lance photographer who documents El Coquí’s nightly forays. Along the way Alex is confronted in his cartoonist’s imagination by dragon-like nemesis El Chupacabra and in his real life by ‘hood ruffian Junior, both played to comically adept extremes by Gabriel Diego Hernández.

Grounding Alex into reality (or trying to) are his patient and well-meaning mother (Olivia Negrón) and his brother Joe (Cesar J. Rosado), whose ad agency job involves being the token Hispanic on the Voltage Cola account and who could give Alex a ‘straight’ job – if only he’d get real. (It’s the art vs. commerce dilemma; the good guys win.)  The five-member cast is uniformly excellent. Director Zayas has them relating to one-another and to the material in just the right proportions. The hinted-at romance between Alex and Yesica, for example, is sweet; the brothers come across as brothers; and their mom is just like yours – if only. (The husband and father had been an NYPD officer, who died rescuing a woman and child from their all-but certain death. In what might be the most poignant line ever, his widow says “Maybe they needed him more than we did.”)

Oddly, and despite frequent references to the brothers identifying as Nuyorican, neither of them speaks Spanish, although they grew up in the ethnic ‘hood, and had recently returned from visiting abuela en Puerto Rico. I’m not sure why that point is made. Maybe it is to stress their assimilation; but them needing Spanish language lessons is a stretch.

The superbly coordinated technical aspects are worth the price. Arnulfo Maldonado’s set rotates in and out of Alex’s bedroom-cum studio to include rooftops and a streetscape that hosts some mano-a-mano encounters, staged by UnkleDave’s Fight-House in POW! WHACK! style.  Lighting designer Zach Blane and Projections/Animation designer Alex Koch are a tandem to reckon with. Various neon-lit tubes and geometric-shaped LED screens create a live-action comic-book look and feel. Designer Asta Bennie Hostetter’s costumes, built under Lesley Sorenson’s supervision, are both exaggerated (the comic book characters) and accurate (the ‘hood denizens). El Chupacabra’s full-body regalia is, I say admiringly, a piece of work! “El Coquí Espectacular and the Bottle of Doom” is as entertaining as it is important– and vice versa. (And the Bottle in the title? Duck, Yesica, duck!)

[For anyone who doubts the impact that the inclusion of an ethnic character in mainstream media can have, I refer you to the op-ed pages in last Sunday’s New York Times: The essay “Guess Who’s Coming to ‘Peanuts’” is about Charles Shulz introducing Franklin into his strip in 1968 and the wholesome effect that first black character had, especially on children. The more things change…right?]