The importance of seeing “Earnest” at Two River Theater

In a modern play about Oscar Wilde, he says “I have spent my life holding language up to the light, making words shimmer.” (Wilde might well have said that.) Then his 1895 play “The Importance of Being Earnest” is referred to as ‘the wittiest play in the English language.’ Nowhere is that shimmering wit more in evidence these weeks than at Two River Theater in Red Bank NJ. Directed by Tony-nominated actor Michael Cumpsty and featuring a cast of Two River newbies (save one), the play, to quote one character’s assessment of another’s quip, is “perfectly phrased.” 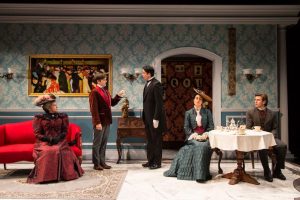 The Irish playwright employed farce and even hints of melodrama to send up contemporary British society. What the upper-class characters do drives the story, of course, but the spirit of the play lies in what they say – and how they say it. “They speak,” wrote a critic at the time, “a kind of beautiful nonsense, the language of high comedy.” That challenge does not exactly portend ease of interpretation by a 21st Century American acting company, but Two River more than meets that challenge. Their ‘Trivial Comedy for Serious People’ (Wilde’s own sub-title), is a gem.

The play itself is perfectly constructed. Each act (of three, here with a single intermission) opens with an exchange that sets up what follows. Built around false identities, chaste (at least outwardly) courtships and, oh yes, a foundling in a handbag, the action culminates in an outrageously improbable – and hilarious – resolution.

Algernon Montcrieff (Sam Lilja) is visited by his friend Jack Worthing (Federico Rodriquez), known to Algy as Ernest. [The Jack/Ernest and, later, Algernon/Ernest confusion is made clear in the play. The how and why of it will not be attempted here. Whew.] Lilja and Rodriquez race through some exposition as if impatient for the entrance of Algernon’s formidable Aunt Augusta, who arrives accompanied by her daughter Gwendolen (Algy’s cousin). Then, now and evermore known as Lady Bracknell, Aunt Augusta is Oscar Wilde’s indelible contribution to theatrical royalty, a status reinforced by Randy Danson’s superb performance. 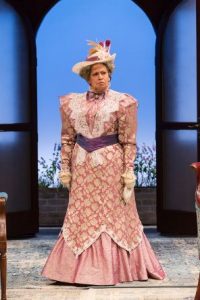 To call Lady Bracknell a grande dame is to diminish her. Interviewing Jack as a potential suitor to Gwendolen, Lady B is pleased that he smokes (“A man should always have an occupation of some kind”) but distressed to learn that he’s an orphan (“Losing one parent is unfortunate; losing both seems like carelessness”). Ms. Danson tosses off these and other devilish bons mot as if born to the form. It is a fine-tuned – and timed – performance.

Jack has eyes for Gwendolen, embodied by Rosa Gilmore, as stunning and statuesque a coquette as ever confounded a man. Ms. Gilmore’s scenes with besotted Jack, and later with Liesel Allen Yeager as Cecily, Jack’s pretty-in-pink ward, are as stylish as are her gorgeous period dresses, which Gilmore models elegantly. 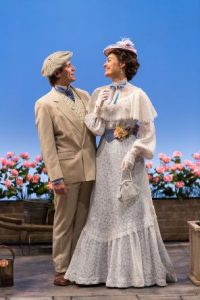 Algernon, posing as Jack’s fictional brother Ernest, and Cecily are the companion couple to Jack (also under the name Ernest) and Gwendolen. The contrast, both in casting and playing, is ideally suited to the play. The more boyish Algy matches up well with Cecily, whose youth (she’s 18) is emphasized by her (somewhat unfortunate) squeaky intonation. “I look quite plain after my German lesson,” she laments. (Not so, not so.) Jack and Gwendolen are hardly oldsters, but they are the more mature pair. (Gwen, for example, judges a hypothetical situation to be “clearly a metaphysical speculation.”) 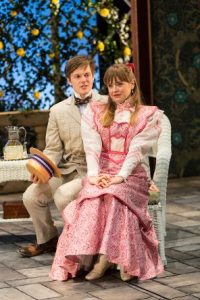 Mahira Kakkar is properly flighty as Miss Prism, Cecily’s tutor, who harbors a secret. Attempting to flee from discovery, she is stopped in her tracks by Lady Bracknell’s commanding “PRISM!” (You would be too.) Chris Kipiniak makes Rev. Chasuble, the rector whose religious rites become relevant, exceedingly stuffy. (That’s praise; he’s supposed to be.) Henry Vick and Bob Mackasek play butlers to Algernon in town and Jack in the country, respectively. Small roles, but important tone-setters, both played very well. 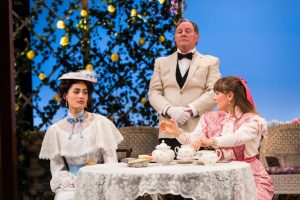 Actors who turn to directing frequently slight relationships in favor of performances. Not so here. In Cumpsty’s sure hands, Algy and Jack are believable chums; Gwen and Cecily’s swing from BFFs to spit-cats and back again is as realistic as it is fun; and the eventual couplings-up make as much sense on the stage as on the page. All performed in concert with one another and with the play. “My nephew,” Lady Bracknell says at the end, “you seem to be displaying signs of triviality.” Cumpsty and company’s “Earnest” is hardly trivial. It mines the nuances of condescension and class differences, is perfectly faithful to the period and, oh yes, it is very, very funny.

P. S. About the foundling in the handbag mentioned up top: let’s just say you have to be there. So go there.