An unscripted moment on opening night of Phoenix Productions’ “Seussical” revealed much about how the show was being received. Nearing the end, the Cat in the Hat addresses the audience rhetorically: “And you know what happened next?” he asks. With split-second timing, an anxious voice from the audience, weak in timbre but not in volume, responded for us all: “What happened?”  (Spoiler alert: Nothing bad happened.) 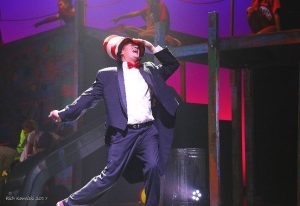 “Seussical the Musical” had an abbreviated Broadway run in 2000-2001 after receiving lukewarm reviews. Based on the works of Theodor Seuss (his real middle name) Geisel, the plot included strands of too many different Dr. Seuss stories. The musical score was overly complex, and at two-plus-hours, it over-taxed its target audience. Even lyricist Lynn Ahrens*, who also co-authored the book with composer Stephen Flaherty*, admitted the show needed pruning, which, once accomplished, created a perennial high school and community theater sweetheart, which the Phoenix Company has embraced with a thoroughly delightful production.

The less-complicated new version is built around a mash-up of  “Horton Hears a Who” and “Horton Hatches the Egg,” with fragments of six or eight other Dr. Seuss stories tossed in, which still makes for a wandering scenario. It must be said, however, that there are worse places to wander than through the Seuss canon. Thanks to Phoenix’s superior presentation, the digressions are more entertaining than distracting. 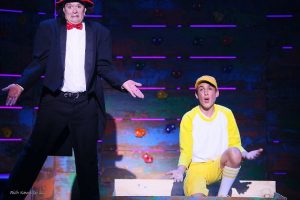 The play opens on a bare stage with a red-and-white striped high-hat upstage center. Young JoJo conjures up The Cat, whose Hat that is, and they are soon joined by the 25-plus ensemble for the opening number. “Oh, The Thinks You Can Think” sets the tone for the mischiefs and monkeyshines that follow, including, but not limited to, scenes in McElligot’s Pool, General Genghis Kahn Schmitz’s military school (“Solla Sollew”), a full-blown circus, Whoville of course, and…well, you get the picture.

And a bright and colorful picture it is. The creative team responsible for the spirited, well-coordinated staging and performances are at the top of their games. Director Corey Rubel, musical director Francois Suhr and especially, considering the number of youngsters on stage, choreographer Kelly Gemellaro keep the show in motion and in sync, supported by an equally adept trio of tech wizards. Alec Hackler’s flexible set provides the requisite levels, nooks and crannies; Meghan Reeves’ varied and colorful costumes capture the look and the spirit of the Seuss characters; and Anthony Calicchio’s lighting spills into the audience, drawing us into the action. (Who knew there were so many neons in the spectrum?) 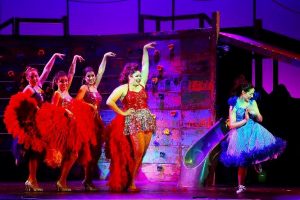 All the principals inhabit their characters without condescending to the material or, more important, to the youngest audience members. Dan Peterson is an ideal Cat in the Hat. Lanky and loose-limbed, he’s a friendly guide through the proceedings. How lucky we are that he sings “How Lucky You Are,” and his seemingly impromptu tap dance highlights the spiffy curtain call. Joe Ronga is a sympathetic Horton the Elephant. A full-size adult, he nonetheless projects child-like (not child-ish) sensibilities. His unwavering belief in the Whoville population is inspiring. (I was among those relieved when JoJo yelled YOPP loud enough to be heard.) A romantic relationship between an elephant and a bird is as hard to convey as it is to imagine, but Ronga’s Horton and Alison Levier’s wonderful Gertrude McFuzz pull it off. (Not to worry, parents; it’s platonic.) “Amazing Gertrude” is her signature number, and lovely Levier aces it. 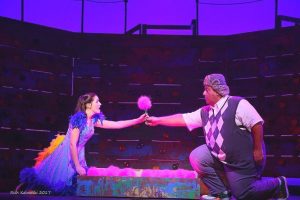 As wanton Mayzie LaBird, who leaves Horton to sit on her egg for its whole gestation period, Rachel Brown is an alluring feathered femme fatale; her “Mayzie in Palm Beach” is seductive. Sour Kangaroo, played with gusto by Jenna Bitow, is a temporary villain. She reforms at the end, but not before Bitow’s vibrant gospel-worthy voice has its way with us. 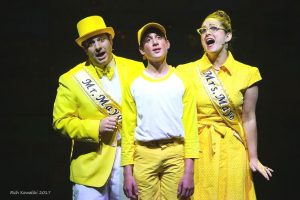 The Whoville clan is well represented by Andrew Behrens as the Mayor, Crystal Huau as Mrs. Mayor, and by sixth-grader Neddy Rossi as their son JoJo, who spurs much of the action, along with The Cat. General Genghis Kahn Schmidt’s scenes are still shoe-horned into the play, but if Bob Brown aspires to play The Major General in “Pirates of Penzance”, “The Military” number could be his audition tape. He’d be a shoo-in. And the trio of back-up Bird Girls that fly in and out – Sarah Coleman, Alexandra Pennington and Lisa Sandoli – rival the Pips.

The flaws are few and not significant. The repeated mantra “A person’s a person no matter how small” is a point well made (although hearing “persin” grates), but the inverse, “no matter how grown up,” also holds. By taking the material seriously without skimping on its antic qualities, producer Lindsay Wood and the Phoenix cohort’s “Seussical” will appeal to kids of all ages…and to former kids as well.

(*That’s Ahrens and Flaherty of “Ragtime,” “Anastasia” and others, including 1990’s “Once on This Island,” being revived on Broadway just this month.)