“Prince of Broadway” = Nostalgia on Broadway

“Prince of Broadway” has been variously compared to a highlight reel, a mix-tape and a best-of list. Simply stated, “Prince” is a compilation of musical numbers from sixteen of the twenty-or-so Broadway musicals produced and/or directed by Harold Prince. Performed by nine Broadway veterans over two acts, the numbers span Prince’s career, from “The Pajama Game” and “Damn Yankees” in the 1950s through “Phantom of the Opera,” directed some 30 years after those early successes.

In between, and also represented here, were “West Side Story,”  “Follies,” “Cabaret” and “Sweeney Todd,” to name a few. (They weren’t all hits: remember “It’s a Bird…It’s a Plane…It’s Superman”? Me neither.)       The critical reaction to the show has been lukewarm at best; I rather liked it. 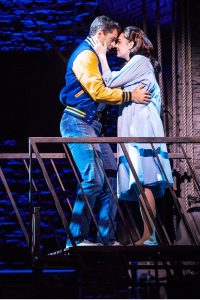 Tony Yazbeck and Kaley Ann Voorhees from “West Side Story”

I have a connection to Hal Prince, however remote. He graduated from the University of Pennsylvania about a decade before I did, and his tenure there inspired more than a few of us who had our sights set on a theatrical career. Soon after establishing his producing bona fides with “Pajama Game” and “Yankees,” he returned to campus to address the annual Penn Players banquet and hand out some awards. (The pride of sharing my alma mater with him is in stark contrast to my embarrassment for a certain other alumnus.)

The excerpted numbers recalled my memories of the shows, not just over the years, but even some of the original productions. Members of that Players group at Penn, for instance, were invited to then-common tryout runs in Philly, including “West Side Story,” which I visited twice at the Erlanger Theater on Market Street. (Prince co-produced it; Jerome Robbins directed and, most famously, choreographed.) The balcony scene, with “Something’s Coming” and “”Tonight,” is re-created nicely in “Prince” by Kaley Ann Voorhees and Tony Yazbeck, whose solo dance number following the songs may be out of context, but is something to behold. (Yazbeck might also be the best-ever Tulsa in “Gypsy,” Patti Lupone’s in 2008.)

I did not see Zero Mostel’s Tevye, which Prince produced (director-choreographer Fosse again), but I was among Lee Strasberg’s guests (long story) at Luther Adler’s opening as Zero’s replacement in “Fiddler” on Broadway. Now, for some reason, “If I Were a Rich Man” is entrusted to Chuck Cooper, who does not attempt any trace of Tevye’s ethnicity. The point of that eludes me, more so since Cooper also sings “Ol’ Man River” in the “Showboat” segment with the accent in which it was written. 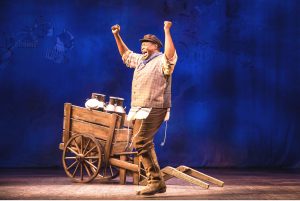 “If I Were a Rich Man”: Chuck Cooper as Tevye

Back in the day, every Broadway show did an Actor’s Fund benefit performance on a Sunday evening during its run. I attended “Cabaret,” which Hal Prince produced and directed, on its turn. The reception for Joel Grey was roof-raising. In the current show, “Willkomen,” “If You Could See Her (through my eyes)” and “So What” are performed well enough, and Bryonha Marie Parham’s take on the title song ends the first act in a blaze of glory. (“When I go I’m going like Elsie…” Whew!)

Those of you who have read this far have surely seen – or appeared in – some of the other Prince-directed shows. “Sweeney Todd,” “Company” and “Evita,” are among those represented here, with varying results. One excerpt, the “Waiting for the Girls Upstairs” quartet from “Follies,” is outstanding. 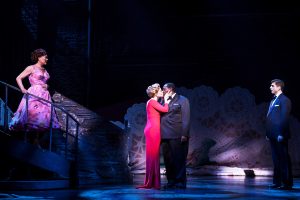 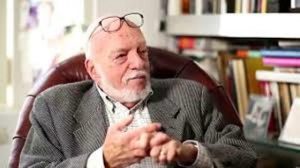 With Susan Stroman as co-director (and choreographer), the ‘Directed By’ credit is Mr. Prince’s. Between the two, there is little innovation or re-imagining in the modestly staged rundown. There’s little splash and, curiously, considering the Stroman and Yazbeck participation, too little dance.  “Prince of Broadway” does succeed – at least for me – as a nostalgic reminder of Harold Prince’s contribution to the history (and all the frequent revivals) of the American musical.