For starters, the F in “F Theory,” world-premiering at New Jersey Repertory Company, does not stand for what you are thinking. No; it represents friendship, in this case not even with benefits, so if you stop reading now and go back to surfing Facebook, I’ll understand.

The friendship in the play is between two women who meet as college roommates and whose relationship endures – for better and for worse, in richer and poorer, etc. – into old age. Theirs is a friendship-interruptus, with alternating periods of bonding and ghosting as their experiences and values variously coincide and diverge. A show of hands, please, from those who have never had an on-again, off-again friendship? Didn’t think so.

So, yes, the topic is potentially provocative and, in theory, “F Theory” would appear to capture it. The opening scene establishes Marianne (Alex Trow) and Ellie (Megan Loughran), both 18, as bff roomies, notwithstanding their greatly different family backgrounds. (The college library is named for Marianne’s mother’s family, which says it all; Ellie is pretty much broke.) Each of the ten or so scenes that follow (at spaced-out intervals up to old age) establishes the women’s accomplishments, their failures and other stuff, including, of course, their sex lives. An amusing bit about Marianne’s cool (as in temp, not style) fiancé Matt’s aversion to part of her anatomy does not bode well for the long term. 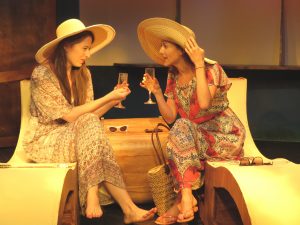 The most engaging of the scenes has the women ensconced in the honeymoon cabana of a resort, posing as a married couple when, in fact, Ellie is soon to attend Marianne at her wedding to Matt, with whom Marianne later has a daughter. (Apparently Matt warmed up.) The play takes a serious turn as they share news of personal crises and eventually clash when Marianne writes a book suggesting that friendships are inherently unequal and portraying Ellie in an unflattering light.

Authored by the two women who comprise the cast (an anti-climactic reveal at this point in the review, I admit), the play emerges as less than the sum of its parts. Several of the scenes do not resolve, and neither Ms. Trow nor Ms. Loughran ages her character perceptively. Their knotty tap routine is explained away as a class they’re taking, but Ellie’s mild song and singing belie her being accomplished at either endeavor. Director Ethan Heard must have signed off on the pace, which, even at ninety minutes, feels padded – the production, that is, not necessarily the play. Both performers seem, well, tentative, which, considering that they co-wrote the piece, is curious. They do double a few character-cameos effectively; the pizza-delivery guy had me fooled well into that scene.

New Jersey Rep specializes in presenting new works for the stage – this is number 110-and-counting. From their program bios, it appears that this is Loughran and Trow’s first full-length play. Whether or not they are well-advised to act it themselves is an open question, but having it staged by the Long Branch outfit is a big deal – a perfect platform for editing, revising, tinkering, whatever, that can only improve the work. Hmmm…  Loughran and Trow: Has a nice ring to it, right?

[The role of Marianne will be played by Pheonix Vaughn on Saturday and Sunday, September 16 and 17, providing an outside perspective…at least half. Interesting.]