A first-class revival of an American classic: “A Raisin in the Sun” at Two River Theater

There is little that I can add to the praise that has been heaped upon Lorraine Hansberry’s “A Raisin in the Sun,” virtually from the hour it opened on Broadway in 1959. Ms. Hansberry, at 29, was the youngest American playwright and the first African-American to win the New York Drama Critics Circle Award for Best Play of the Year. Her play has not only stood the test of time, it has become a revered classic. Reviewing a revival in Chicago twenty-four years later, New York Times critic Frank Rich declared that playwright Hansberry had “changed American theater forever with her first-produced play.”

What I can do, having seen the original, which cemented Sydney Poitier’s stardom, plus a 1995 staging at George Street Playhouse and the 2004 and ’14 Broadway revivals (with Sean ‘P Diddy’ Combs and Denzel Washington, respectively), is to offer an assessment of the current production at Two River Theater in Red Bank NJ.

Deeply felt and superbly directed and acted, it is a triumph. If you have never seen the play or would like a reminder of its brilliance, get yourself to Two River before October 8. 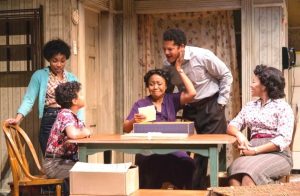 Set firmly in its place and time (Chicago’s South Side in the 1950s), the play transcends those limits in its depiction of the three-generational African-American (“colored” or “Negro” in context) Younger family, in crisis mode over how to spend the $10,000 proceeds from the recently deceased patriarch’s life insurance. Living as they do in a cramped run-down apartment (with a shared bathroom), it is a colossal sum of money. 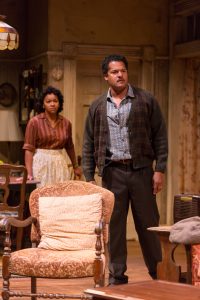 Crystal A. Dickinson and Brandon J. Dirden as Ruth and Walter Younger

The son, Walter Lee Younger (Brandon J. Dirden, singularly masterful), wants to invest in a liquor store. His mother Lena (Brenda Pressley) has other ideas, including putting some away for daughter Beneatha’s (Jasmine Batchelor) medical-school tuition and putting a down payment on a house, which [spoiler alert] she does – in a previously all-white community. Walter’s wife Ruth (Crystal A. Dickinson) is caught in the middle between Walter’s unrealistic dreams and Lena’s practicality.

That deceptively simple plot line is the framework for the surgical-like examination of the characters’ hearts and souls. The extent to which we learn about the Younger family in 150 minutes that fly by is vast. That their bonds persevere in the face of racism and a cruel, if foreseeable, betrayal is remarkable.

The play has been regarded as a male-star vehicle (starting with Poitier), but, while the demanding role of Walter Lee is central to the narrative, “A Raisin in the Sun” is about its women, evidenced here by three who enact the family as if born into it. (This is not to diminish Dirden’s performance. He is, in fact, so good, especially at establishing relationships, that he brings out the best work in his cast-mates.)

Brenda Pressley appeared in the George Street production referenced above, where she “triumphed,” I wrote, in a “wonderfully sensitive performance – as Ruth! What a pleasure to see her reach even more impressive heights as Lena. 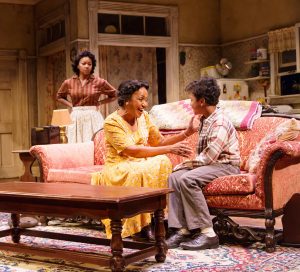 Two River’s Ruth is fully realized by Ms. Dickinson, who plays the complex woman’s physical and emotional near-devastation as well as her moments of unbridled exhilaration seemingly from the inside. Beneatha Younger represents an emerging generation of African-American women that Lorraine Hansberry herself embodied. Ms. Batchelor conveys her strength and latent activism and also her – dare I say – girlish charm. It’s no wonder that straight-laced George Murchison and Nigerian mensch Joseph Asagai (the admirable York Walker and Charles Hudson III) both crave her affections.

Walter and Ruth’s ten-year-old son Travis completes the Younger family. Owen Tabaka, also ten, is perfection in his acting debut. Great start, Owen. The sanctimonious man from the New Neighbors Orientation Committee is a weasel in a suit and tie. Nat DeWolf plays him without a sneer, making him even more hateful. An essential cameo is played very well by Willie Dirden, who is Brandon’s real-life father, which also makes him Ms. Dickinson’s real-life father-in-law. (Think about it.) 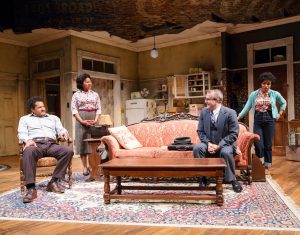 The set design (Christopher Swader and Justin Swader) includes a hallway with a bathroom door and a staircase stage left, which I found distracting, but which closes in Two River’s wide playing area to emphasize the Youngers’ cramped conditions. Kathy A Perkins’s lighting design is excellent; one particular dimming effect adds immeasurably to an emotional scene.

When all the elements of a multifaceted play come together as grandly as here, one marvels at its maestro. Bravo, director Carl Cofield.

Note: While the ending of “A Raisin in the Sun” is uplifting, the play originally included a scene with the Youngers’ busybody neighbor Mrs. Johnson cautioning Lena about moving. “I bet this time next month y’all’s names will have been in the papers plenty,” she says, mocking a headline: “NEGROES INVADE CLYBOURNE PARK – BOMBED.” (The playwright’s caps). The scene was dropped before opening (partly to save hiring another actor), but later, Ms. Hansberry, who had been nearly killed in a real-life racial incident, bristled when a critic wrote that the play had a ‘happy ending’. “If he thinks that’s a happy ending,” she said in an interview, “I invite him to come live in one of the communities where the Youngers are going.” Some things change over time…and some things don’t. Lorraine Hansberry died of cancer in 1965 at age 34; “A Raisin in the Sun” is her legacy.