There must be as many ways of creating the Forest of Arden onstage as there are productions of “As You Like It.” In director John Doyle’s minimalist production of Shakespeare’s romantic comedy at Classic Stage Company, you know you’re in Arden when the multiple globes hanging over the playing area glow green. That effect is enhanced by the light touch of the mostly young, buoyant cast, headed by spritely Hannah Cabell as Rosalind, Shakespeare’s longest female role by line count.

Beginning as a reading, with the ten-member cast grouped around Ellen Burstyn seated on a theatrical trunk holding the book, the play soon spills out onto the playing area. Burstyn, who goes on to play Jaques, stays seated, following along, keeping us aware that what’s unfolding is a play, a point that Shakespeare makes in several plays (“Shrew,” pointedly). The “As You Like It” characters often see themselves as actors, and at the end, the audience is invited to think of themselves the same.  Doyle’s vision unfolds over 100 continuous minutes, made possible by judicious editing that retains the play’s witty interlacing of disguises and mistaken identity. 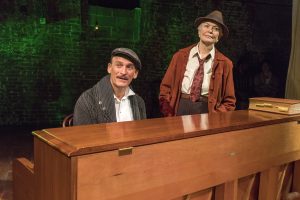 Duke Senior, deposed by his younger brother Duke Frederick (both played by Bob Stillman, a common doubling), lives in exile in the Forest of Arden, attended by several loyalists, including Jaques, who embodies melancholy world-weariness. Stooped and dour, (and played male, as written, by Burstyn), Jaques is the quintessential commentator on human foibles – memorably expressed in the Seven Ages “All the World’s a stage…” speech. (Canadian actress Seana McKenna played Jaques as a woman at Stratford last year. Both interpretations raise the suspension-of-disbelief bar; both women cleared it.)

Duke Senior’s daughter Rosalind (Cabell) is smitten-at-first-sight with Orlando (Kyle Scatliffe) after he wins a court-sponsored wrestling match (off stage, with no detriment to the play). Rosalind, accompanied by her cousin Celia (Quincy Tyler Bernstine) and court jester Touchstone (Andre De Shields), joins her father in the forest, where, disguised as male youth Ganymede, she tutors unsuspecting Orlando in the niceties of courtship. Their role-play (Ros as Gany pretending to be Ros) is the centerpiece; Cabell and Scatliffe mock its seriousness that translates into fresh-faced humor. 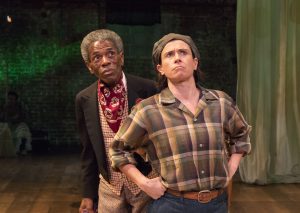 Ms. Bernstine’s Celia is a standout, both as a wry observer of Rosalind’s machinations and in her own infatuation with Orlando’s brother Oliver (Noah Brody). Touchstone (De Shields) also finds a mate in “foul” county girl Audrey, enacted by Cass Morgan, who also excels as Oliver’s loyal aged servant Anna-cum-Adam.

An innovation that marked director Doyle’s revivals of Stephen Sondheim’s “Sweeney Todd” and “Company,” having the actors double on musical instruments, is employed here as well. Some of Shakespeare’s “lyrics” have been set to original music by Stephen Schwartz (“Wicked”), and, lucky for all concerned, Duke Senior is an accomplished pianist. (The actor, Mr. Stillman, is on the Musical Theater faculty at the Manhattan School of Music.)  Equally fortuitous, shepherd-girl Phoebe (Leenya Rideout, a veteran of Doyle’s “Company”) plays a mean fiddle and double bass. Their combo serves Schwartz’s jazzy-cabaret compositions well.

At 100 minutes, this qualifies as bare-bones Shakespeare, but it retains a degree of charm. Played up close and personal to the audience that remains in half-light throughout, it is unpretentious and high-spirited, save, of course for Mr. Melancholy. And you’re unlikely to see Ellen Burstyn in necktie and slouch hat soon again.

And a few words about the Westchester Broadway Theatre (WBT):   Forget your preconceptions about dinner theater, with re-heated platters served indifferently before an ad-lib filled performance of “The Odd Couple” featuring refugees from “Hollywood Squares.”

WBT is a first-class facility with an up-scale dinner menu, attentive service, spacious table-seating on raised platforms, and, oh yes, fully-staged musical theater productions. Currently, Irving Berlin’s “Annie Get Your Gun” is the after-dinner attraction, and the combination is just right. 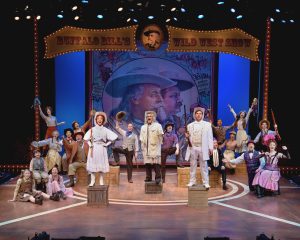 The “Annie Get Your Gun” cast [Photos: John Vecchuilla]

The 1946 musical, set in the 1880s, pits hillbilly Annie Oakley against handsome Frank Butler in sharpshooting contests – and in a love match of course – in Buffalo Bill’s traveling Wild West Show. The dated book by Herbert and Dorothy Fields’s 1946 book is old-hat (even as updated in 1999 by Peter Stine), but Berlin’s score is a memory bank to cherish.

“The Girl That I Marry” and “I Got Lost in His Arms” are timelessly lovely. “Doin’ What Comes Naturally” and “You Can’t Get a Man With a Gun” are much more than novelty tunes. And there’s “I Got the Sun in the Mornin’” and “Anything You Can Do (I can do better)” and “They Say It’s Wonderful.”

And: ”There’s No Business Like Show Business”    ‘Nuff said. 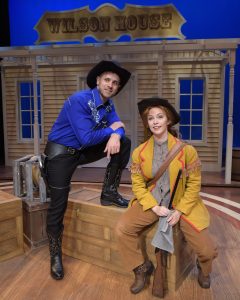 The show depends on its Annie Oakley (written for Ethel Merman), and Devon Perry is the right actor in the right place. She’s a charmer – a ball of energy with a clear, pitch-perfect voice. Adam Kemmerer is a worthy Frank Butler, and the supporting cast, including a ten-member ensemble all hit their marks. (Tap dancing in a Wild West Show? Why not?)

Directed and choreographed (with Kristyn Pope) by Richard Stafford, this presentation (along with an excellent chicken piccata entrée) is enough to give Dinner Theater a good name!

Through November 18 at Westchester Broadway Theatre, #1 Broadway Plaza, Elmsford, NY. For show schedule (evenings and some lunchtimes), tickets and directions: 914-592-2222 or online at www.broadwaytheatre.com