Improved with age: “I Love You, You’re Perfect, Now Change”

Two things to know about George Street Playhouse’s temporary home on the Cook College Campus of Rutgers University: One is that the venue is temporary only in the sense that GSP will be moving back to downtown New Brunswick when the Livingston Avenue performing arts center is completed – in an estimated two years. In the meantime, however, the Cook Campus facility is comfortably sleek and technically up-to-date in all aspects.

The second thing is that the opening production, “I Love You, You’re Perfect, Now Change,” is a clear winner. Re-vamped by the creators of the 1996 original that ran twelve years off-Broadway (second-longest after “The Fantasticks”), the new version retains a goodly portion of the original with tweaks that make the whole enterprise fresh as the proverbial daisy.

“Love…Perfect…Change” is a series of vignettes, most musical, about relationships. Each scene is independent of the others, but a timeline emerges, starting with a first-date situation and progressing through courtship, marriage, child-rearing, etc. Joe DiPietro’s book and lyrics progress as well. Set to Jimmy Roberts’s engaging tunes, the earliest jokey material matures up to and including the penultimate “Funerals are for Dating” scene, which is an uncanny combination of comedy and poignancy.

While up-dates proliferate, all but one of the scene titles are the same. That one exception, originally “I’ll Call You Soon (Yeah Right),” is now “When a Man Texts a Woman.” And while the title “Whatever Happened to Baby’s Parents?” remains, the couple is now same-sex.

Many of the headings indicate the topics. “Cantata for a First Date,” “Wedding Vows” and “Sex and the Married Couple,” for example, seem obvious, but the clever internals hold delightful surprises. George Street’s artistic director David Saint helmed this one for laughs, for sighs and for human connection. A triple success. Charlie Williams’s choreography is sprightly. (That dad, mom and two kids avoid colliding in “The Family That Drives Together” is a miracle.) Scenic and Media Design is credited to Jim Youmans, whose platforms, projections and set pieces enhance every scene.

The Family That Drives Together

The four performers and the four musicians, under musical director Joshua Zecher-Ross, flirt with perfection. The few less-than-stellar sketches are elevated by the talent, and the best of them are miniature marvels. Mitchell Jarvis and Karen Burthwright are “A Stud and a Babe” (are they ever!) and George Merrick and Lindsay Nicole Chambers turn “Tear Jerk,” about a guy’s breakdown at a chick flick, into a gem. In various configurations, the four are fresh and sharp throughout, and, lucky for us, they each get a solo turn.

My 1996 review closed with “You will enjoy this musical review. You’ll also enjoy repeating the title to your friends.” The newly refreshed “I Love You, You’re Perfect, Now Change” is even better…and that title still zings.

Through November 12 at George Street Playhouse on the Rutgers Cook Campus (for now). For schedule, directions and tickets ($15 to $79):www.georgesteetplayhouse.org

A highly anticipated industry-insider event returns to NYC when the National Alliance for Musical Theatre (NAMT) holds its 29th Annual Festival of New Musicals on Thursday and Friday, October 19 and 20.

The Festival, personifying NAMT’s mission to nurture the creation, development and production of new musicals, attracts theatrical producers from around the world for the premieres of eight new musicals, presented in 45-minute blocks over the two days. All production costs are underwritten by the non-profit organization NAMT, at no cost to the writing teams. To date, 244 musicals by 460 writers from around the world have been introduced at the Festival.

Among this year’s tempting titles (culled from 240 submissions) are “Girl Shakes Loose,” billed as a “three-city coming-of-age journey” and “Dancing Grenadine,” about a jingle composer’s fraught relationships with his girlfriend Louise, his brother Paul and his Labrador Retriever (also named Paul). 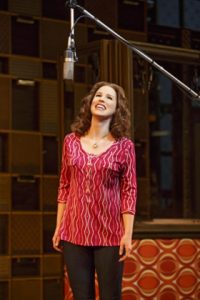 Many cast members are Broadway veterans, including the current star of “Beautiful: The Carole King Musical,” Chilina Kennedy (pictured). She will appear in “Prom Queen,” based on the true story of a Canadian teenager who took the Catholic School Board to court over their refusal to allow him to attend the prom with his boyfriend. (Ms. Kennedy was an unforgettable, luminous Maria in “West Side Story” at the Stratford Ontario Festival a few years ago.)

The NAMT Festival’s immediate goal is to connect producers with writers, so that their shows can continue their development trajectory. Long-term is to expand the repertoire, bringing new musical theatre to audiences around the world. Short of World Peace, I cannot envision a worthier goal.