In life there are the care-givers, the care-receivers, and those who simply don’t care. All three are represented in Scott McPherson’s “Marvin’s Room,” finally debuting on Broadway, thanks to Roundabout Theatre Company, after its 1990s Regional and off-Broadway runs. Like other socially conscious plays from that era – Beth Henley’s “Crimes of the Heart” comes to mind – “Marvin’s Room” attempts to mesh Drama and Comedy, and, like “Heart,” it succeeds.

McPherson’s play was inspired by the circumstances of some older Florida relatives in declining health and further influenced by his personal experience caring for his AIDS-afflicted partner, cartoonist and activist Daniel Sotomayor, who died in February 1992 at age 33. In a tragic irony, the playwright himself succumbed to the same scourge nine months later, also at 33. 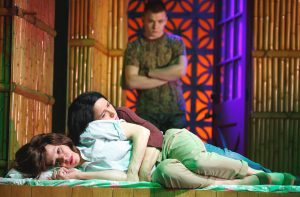 Middle-aged sisters Bessie (Lili Taylor) and Lee (Janeane Garofalo) could not be more different from one another. Bessie has sacrificed her independence to care for their father, Marvin, bedridden with terminal cancer, as well as for their aunt, Marvin’s sister, whose spine is withering. Lee had gone her own way, cutting off all contact. In the years since the sisters split, Lee’s marriage failed and her late-teen son Hank (Jack DiFalco) has been undergoing treatment in a mental institution after setting his mother’s house on fire. Younger son Charlie is a quiet, bookish, budding intellectual. After Bessie is diagnosed with leukemia in the play’s opening scene, its funniest (funny? leukemia? believe it), Lee shows up with the boys in tow. Could one of them be Bessie’s bone marrow match? More to the point, will they care enough even to be tested?

It takes a while to accept Bessie and Lee as sisters, but Taylor and Garofalo establish something of a bond, however tenuous, despite their characters’ opposing values. This is not Ms. Garofalo’s first time out of the wise-cracking fem gate; let’s just say that Ms. Taylor’s is the more nuanced, natural performance. The disturbed Hank’s love-hate relationship with his mother that erupted in arson is captured by an intense (but not too method-y) DiFalco.

The play veers into soap-opera melodrama in spots, but director Anne Kaufman hauls it back, keeping us involved with the family-of-many-discomforts. We root for someone to be a bone-marrow match for Bessie. Whether or not anyone does match is revealed at the end. Of the play, not of this review.