Settings and casting variations on Shakespeare are virtually infinite. “Othello” in an Army barracks? “Shrew” on a Dude Ranch? A female Prospero or even Richard III? A campy “Pericles” set in a tavern? Been there, seen that.

Due to its being the most widely produced of Shakespeare’s plays, “A Midsummer Night’s Dream” is beneficiary (or victim) of an outsized number of such constructs. In 2014, for example, the Stratford Festival in Ontario had two men alternating performances as Oberon and Titania on the main stage, while in a nearby venue four intense young actors presented a “chamber” version that turned it into a dirge (no easy task).

How refreshing, now, to see the romantic, magical work played where it is largely set, in an open-air nocturnal park, and cast by-the-gender (mostly), if not by-the-book (hardly). The comedy, as funny here as you’ll ever see it, is a perfect fit for The Public Theater’s Free Shakespeare in Central Park, where last month a recognizable Julius Caesar bought the farm. No killings or politics in this one. 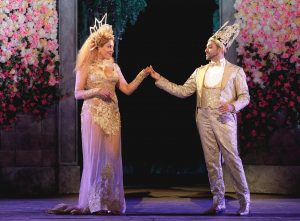 “Dream,” one of the few Shakespearean plays not based on a traceable source, is a tapestry woven from intersecting threads. Framed around the impending nuptials of Theseus, Duke of Athens, and the conquered Amazon Queen Hippolyta, two young couples become involved in a magical-potion-induced romantic roundelay, while a sextet of “rude mechanicals” rehearse a play to perform at the State wedding.

All the while, Oberon, King of the Faeries, is squabbling with Faerie Queen Titania over custody of an ethereal young boy she had adopted.  Oberon’s revenge tactics, executed by his servant Robin Goodfellow, aka Puck, result in a series of magical shenanigans that involve all the above-mentioned – and which, forgive me, defy further detailing. (You’ve probably seen the play anyway…or been in it.)

The roster of A-list actors who spend their mid-summer nights doing Shakespeare in Central Park expands with every production. Phylicia Rashad is as alluring a Titania who ever canoodled with donkey-headed Bottom, played to comic perfection by Danny Burstein, fresh from his acclaimed Tevye on Broadway. Kristine Nielsen, hardly a conventional Puck, brings her patented head-take shtick to the role (in striped PJs, yet), and in a quirky casting coup, Titania’s attendant sprites – Peaseblossom, Cobweb et al – are not, well, sprites. Played by unabashed Medicare recipients, they nonetheless step lively to Justine Levine’s original music, choreographed by Chase Brock and laid down by music director Jon Spurney’s jazzy sextet, ensconced in a stage-left tree house. 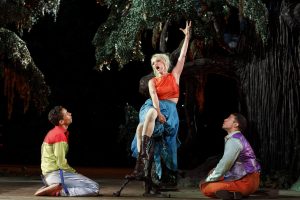 The entire cast in director Lear deBessonet’s delightfully free-wheeling production is terrific, including the hilarious ‘Pyramus & Thisbe’ ensemble, but first-among-equals has to be snazzy Annaleigh Ashford, who, while her bio lists no other Shakespeare, nails what often draws praise even for near misses. As Helena, one of the entangled lovers, the multi-talented Ms. Ashford brings Master Will’s Elizabethan text into sharp, up-to-date focus. Eye-rolls, flouncing and gestures of exultation are not recent inventions; they’re been employed for at least 400 years. How do I know this? I saw it last week in Central Park.

Through Aug. 13 at Delacorte Theatre in Central Park (enter at 81st and Central Park West). Performances Tues-Sun at 8PM. A line usually forms early (the park opens at 6AM) for free same-day tickets, which are distributed at noon.