“Halftime With Don” worth your time…

Chronic traumatic encephalopathy, or CTE, is a degenerative disease found in people who have suffered repeated blows to the head. Symptoms, which manifest themselves eight-to-ten years later, begin with memory loss and general physical, social and judgmental instability, leading inexorably to dementia and a propensity to harm others…or oneself. There is now a play about a retired NFL linebacker exhibiting symptoms of CTE. What took so long?

Ken Weitzman’s “Halftime With Don,” simultaneously world-premiering at New Jersey Repertory Company and a couple other U. S. houses, is a fictional drama whose most interesting portions are semi-documentary. This is not a knock, by any means. The well-founded points made about CTE add to a sense of reality. (The play is not about football per se, but name-checking such as Junior Seau and Mike Webster drive the theme home.)

Don Devers (Malachy Cleary), pretty much confined to his easy-chair lounger with an injured leg, subsists on a diet of Pringles, Gatorade and direct-to-mouth squirts of Reddi-Whip, hardly a balanced diet. The menu expands when unemployed long-time fan Ed Ryan (Dan McVey) eventually brings candy bars in an effort to pry personal info out of Don for a journalistic piece proposed by Don himself, details of which are revealed gradually (but not here). 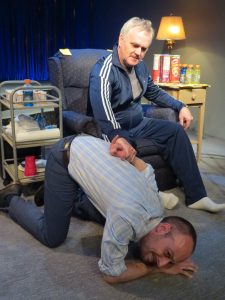 Cleary’s nuance-free performance works as a stark portrayal of what we (I, at least) might imagine the advancing stages of CTE to entail. He gets some laughs, which, being at him, are nervously prompted. McVey’s at-first fawning and later fearful fan is a more subtle, effective performance, and the two women are excellent, both individually and as a bonded mini-maternity ward. 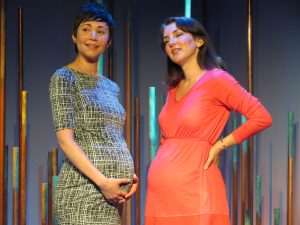 The play’s awkward ending is a downer, despite its sentimental twist, but the whole two-act enterprise, smoothly directed by Kent Nicholson on Jessica Parks’s minimal set, is laudable, not least for bringing awareness of CTE to audiences that might not read the sports pages.