The heat is back on in “Miss Saigon”

“Miss Saigon” was the first play I reviewed for the Two River Times in Red Bank, NJ – or for anywhere, actually, since a stint on a Rhode Island weekly during a long-ago college summer recess. I attended the April 11, 1991 opening at the Broadway Theatre as the guest of lighting designer David Hersey, with whom I had worked in stock. (David, Tony-nominated for “Saigon,” had already won for “Evita” and for “Les Mis,” where he devised the intricate sewer-rescue effect.) My friend Claudia Ansorge had recently founded the Two River Times and agreed to run my coverage; Claudia and her publishing-partner Geraldo Rivera hired me soon after, based on that column.

The Broadway opening was bathed in controversy. “Les Mis” had moved to the Imperial, freeing up the more spacious Broadway, to accommodate the “Miss Saigon” sets, which included – then and now – a life-size helicopter landing. British actor Jonathan Pryce starred as The Engineer, a Eurasian pimp, and Asian groups were protesting the casting of the caucasian Pryce, who had created the role in London. Opening night demonstrations closed the streets for several blocks. 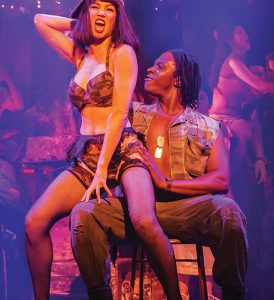 The heat is on in Saigon!

Actors Equity Association had mounted an earlier protest, but that Union backed down when producer Cameron Mackintosh threatened to cancel the New York engagement and return the $25 million in advance sales (which promptly grew to near $40 million). Equity also challenged the casting of Filipina Lea Salonga in the title role of Kim, lobbying for an Asian-American, but lost in arbitration. And so the helicopter landed in New York.

The rest is history. Pryce and Salonga (and supporting actor Hinton Battle) won Tony Awards and the play ran nearly ten years. I saw it again in 1993, with an Asian Engineer who was quite good, if not up to Pryce, and a third time shortly before it closed, by which time it had lost some of its mojo. Subsequent chopper-sightings have been at Paper Mill Playhouse in 2002; a notable 2009 staging by Phoenix Productions in Red Bank, NJ (whirly bird and all); in Toronto in 2010; and, past being prologue, last week back at the Broadway Theatre. 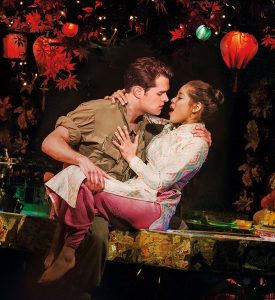 The Claude-Michel Schonberg (music), Richard Maltby, Jr. and Alain Boublil (lyrics) update of Puccini’s “Madama Butterfly” is set in 1975 Vietnam, during the last tumultuous days of the American occupation. Opportunistic traders are scrounging out the last of the GI dollars in exchange for goods and flesh. Newbie bargirl Kim (Eva Noblezada) is thrown together with Chris (Alistair Brammer), a Marine attached to the American Embassy. Amid the chaos of military upheaval, their tryst blossoms into a classic, tragic love story. And hovering over all: the oily presence of The Engineer (Jon Jon Briones), who survives by shifting with the prevailing political winds.

“Miss Saigon” is operatic in form, sung-through, including some less-than-melodious prosaic dialogue, especially in the American scenes. (“Let me tell you how it was back when I didn’t have a clue” works when you say it, but try singing it.) Many of the actual song-songs and production numbers, though, are memorable. Among the latter, “The Heat Is On,” recreates the steamy underbelly of a Saigon saloon fleshpot, where the skimpily-clad women’s simulated couplings with the GIs leave no doubt about their occupation. How they feel about what they do is another story, revealed achingly in “The Movie in My Mind,” sung beautifully by Gigi (Rachelle Ann Go), Kim and the bar girls. 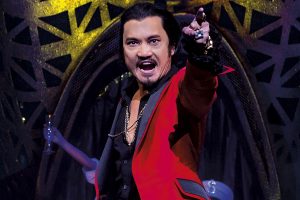 Jon Jon Briones as The Engineer

Chris liberates Kim, setting up hut-keeping with her and giving rise to the duets “Sun and Moon” and the soaring “The Last Night of the World,” that cement the chemistry between Kim and Chris (and, not less, between Noblezada and Brammer).

While The Engineer does interact with the other principals, he is also set apart, as a sort of commentator. “If you want to die in bed, follow my example,” he sings as he packs up his stash (a la Fagin). Briones is very good in the role, which he originated for this revival in London, from whence it came. He does not catch the edge, however, of the nefarious devil you disdain while still rooting for his plots to succeed. (Pryce set the bar high.) The Engineer’s ‘eleven o’clock number’, “The American Dream,” is, with its shift of tone from the rest of the show and its sardonic lyrics, virtually actor-proof. It certainly works here. (The added “make America great again” reference doesn’t hurt.)

About the helicopter: Making its approach from audience rear (rotor breeze and all) as a virtual image, it then lands its physical body on the roof of the American Embassy. With soldiers (including Chris, sans Kim) clambering aboard and would-be refugees clamoring below, the effect is super.

Kim and Chris’s war-time affair is ill-fated. Three years later Chris is married in Atlanta, while Kim is raising their son, having migrated to Bangkok (don’t ask).  The Puccini-esque ending brings on the sniffles, but if we didn’t care by then about Chris and Kim et al, there’d be no need for tissues. There is nothing not to like about this “Miss Saigon” revival.

The Broadway Theatre, on Broadway at 53rd Street, NYC. For performance schedule (Mon-Sat) and tickets: Telecharge.com or 212-239-6200