A classic well told: “Of Mice and Men” in Holmdel, NJ

Some years ago I picked up a 1939 edition of John Gassner’s “20 Best Plays of the American Theatre” at the Cincinnati Public Library’s Buck-a-Book sale. Among the titles are some that haven’t left the printed page in decades (Winterset, Boy Meets Girl), a couple of occasionally revived artifacts (Golden Boy, Three Men on a Horse), one or two I’d never even heard of (End of Summer, The Fall of the City) and one enduring classic: future (1962) Nobel Laureate John Steinbeck’s “Of Mice and Men,” adapted virtually intact from his 1936-37 novella, which has been documented as one of the ten most-frequently read books in public high schools. In the work (as well as in “The Grapes of Wrath,” of course), Steinbeck contemporaneously captured the tone of the Great Depression with an insight usually reserved for historians.

Holmdel Theatre Company is nearing the end of its limited “Of Mice and Men” run. Insightfully directed by Michael Kroll on Joyce Horan’s just-enough of a spare set, and cast exactly to type, this is as fine a “Mice and Men” staging as you’ll see anywhere – certainly in a 95-seat converted barn, set on a sprawling suburban New Jersey high school campus. But that is indeed where you can catch it. If you’re lucky.

Unlike the usual loner itinerant farm hands, Lennie (Brian Craig) and George (Dave Duncan) are bonded – what we’d now call co-dependent. Big, dull-witted Lennie struggles with impulse control and memory block. George, smaller and smarter (more than relatively so), is the big guy’s protector and guardian. They share a fantasy of owning their own spread, which Lennie urges George to describe again and again, a repetition that cements George’s reverie as well as Lennie’s, and which Duncan and Craig play so well that the audience also visualizes it. The effective opening scene establishes the relationship, and both actors find the elusive middle-ground between under- and over-playing their contrasting characters, a balance they maintain through to the play’s heart-breaking, if inevitable, ending.

The population of the farm where George and Lennie find work is equally well cast and performed (and costumed, by Denise Sobotka). The foreman, Slim, is a steady presence; Jeff Caplan captures both his confidence and his compassion. Paul Caliendo conveys aging bunkhouse fixture Candy’s bleak future physically and emotionally – and through devotion to his dog (more perfect casting). Carlson is less fond of Candy’s dog; Steve Bartlow makes his unfeeling callousness seem inborn. Tristan Takacs brings the necessary bounce to Whit, the youngest hand, and venerable character actor Dave Harris is as good as I’ve seen him as the stern-but-fair ranch boss. 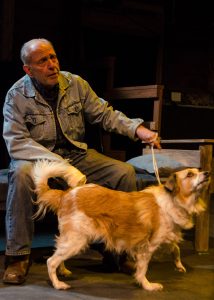 The boss’s son is another matter. Curly is cocky, petulant, intolerant, and wildly jealous of his wife of two weeks…not without cause. Ironically, he’s also the source of some of the play’s scant humor, which Roberto Forero mines by not reaching for it. Curley’s Wife (her only name, a master stroke in itself) has been known as actor-proof, serving mostly to facilitate the tragic ending, but Ava Serene Portman gives her a real presence. She’s not as dense as Lennie, but she’s equally deluded. Their scenes together are excellent; one where they circle one another metaphorically and physically is a directorial gem.

In a sort of sub-plot – and one that stirs controversy in some quarters even today, there’s Crooks, so-called for his injury-bent spine, who has his own quarters apart from the common bunkhouse. Because he’s black. Referred to by the casual use of the common epithet, Crooks’ loneliness and resentment are crystal clear in Arthur Gregory Pugh’s fine performance. 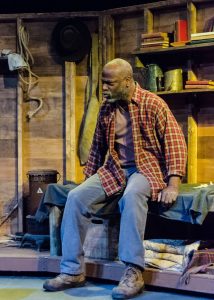 At one point in the play, there’s a glimmer of hope that George, Lennie, Candy and Crooks would indeed get their own place and live “off the fat off the land.” Alas, it is not to be. John Steinbeck, master chronicler of the Depression-era downtrodden, makes it clear that it cannot be. Holmdel Theatre Company honors his vision.

[Note: Holmdel occasionally hires a professional ringer or two (with mixed results), but this is an all community-member cast and director.]