“The Price” is right

“The Price” is not a comedy – far from it. But Arthur Miller’s seldom-staged play demonstrates something his other plays do not – that Miller could indeed write funny. Not just the absurdist humor of Willy Loman’s refrigerator rant or Giles Corey’s rebellious sarcasm, but laugh-out-loud funny lines. Any doubt of that is erased by Danny DeVito’s performance. The Broadway revival comes on the heels of recent sightings of “The Crucible” and “A View From the Bridge,” which were both highly stylized by Belgian director Ivo Van Hove. But Terry Kinney (co-founder of Chicago’s Steppenwolf Theatre), lays “The Price” at the feet of Miller’s original concept (an innovation in itself these days). 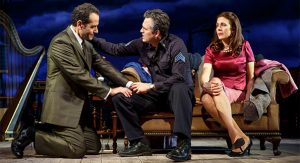 Set in 1968, a pair of estranged middle-aged brothers – Victor (Mark Ruffalo), a beat cop, and Walter (Tony Shalhoub), a successful surgeon  – are charged with disposing of their deceased father’s collection of vintage furniture. The conditions under which Victor sacrificed his promising future and allowed Walter to realize his are exposed in a series of revelations that peel away any veneer of sibling affection. Bit by bit we learn things about both brothers’ (and their father’s) deceits, their finances and their false assumptions.

The play is interesting as further insight into Miller’s own parental issues, and the unfolding story holds one’s attention, despite some repetitious, talky passages. Ruffalo and Shalhoub’s performances reflect the characters’ coldness toward one another, with Shalhoub’s physician brother projecting formality and Ruffalo’s cop brother channeling Terry Malloy. Victor’s wife Esther is a buffer between the two; Jessica Hecht makes the most of the largely functional role. 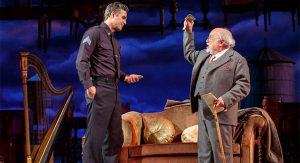 Then there’s DeVito, in his Broadway debut as Gregory Solomon, a 90-year old Jewish used-furniture dealer who drives a hard bargain – or knows how to get around sellers who don’t. De Vito has his way with lines that may not elicit laughs on the page. Asked if he wants water after puffing up the attic stairs, “Water I don’t need,” he replies, “a little blood I could use.” DeVito’s Solomon dominates the middle third of the play with equal measures of self-deprecation and deceptively simple wisdom, as in his comment about people selling-off their possessions: “So it’s always a new story,” he declares. “I mean it’s the same, but it’s different.”

Family dysfunction, especially between fathers and sons, is a frequent Arthur Miller theme – think “Salesman” and “All My Sons.” And so it is in “The Price,” a new story from those others. I mean it’s the same, but it’s different.