Come from wherever to see “Come From Away”

Anyone who doesn’t believe in the Magic of Theatre would be well advised to get to “Come From Away,” where a dozen diverse performers, aided by some chairs, a few coats and hats and fewer props, create three times that many characters.

The cast of “Come From Away” (Photos: Matthew Murphy)

In the immediate aftermath of the 9/11/2001 attacks, U. S. air space was shut down, cancelling flights from around the world for days. (My son and daughter-in-law were stranded in London.) But what about the flights already airborne on that Tuesday morning?  Hundreds of them were ordered to return to their departure points or find other landing facilities en route – just not in the U.S.

Thirty-eight of those planes, mostly commercial airliners carrying some 7,000 passengers, landed at Gander International Airport in Newfoundland, Canada. (The small town’s airport had been built to accommodate large aircraft for re-fueling stops.) After more than 24 hours on the tarmac, during which “There’s been an incident in the United States” was the extent of their Intel, the passengers were allowed to disembark. They were welcomed by the Canadian citizenry and bused to sites in Gander and the even smaller fishing village of Lewisporte, where make-shift facilities had been hastily arranged. “Come From Away” is about the ensuing four days in Newfoundland – an unlikely topic for a musical, but one so well-crafted that it might have sprung up spontaneously during the ordeal.

(The Gander bus drivers were on strike that day and left their picket lines to run the transport. This is but one of the many actual facts embedded in the play, including all the personal stories.)

Even considering the devastating events of 9/11, “Come From Away” is an uplifting show. Rarely has altruism and compassion been as deeply explored and conveyed, much less in a hundred-minute musical.  Mostly sung-through, Irene Sankoff and Davis Hein’s book, music and lyrics mesh seamlessly, as the portrayals switch on a dime from townspeople to passengers and back again. Each cast member is listed with a specific role “and others.” Caesar Samayoa, for example, plays half of a gay couple who fear rejection if they ‘come out’ and also a Muslim passenger, equally nervous about his reception (misplaced concern in both cases).

Even with the role-switches, the characters remain consistent and the story line flows. There’s much humor, as when an African-American passenger is dispatched to confiscate barbecue sets from back yards, and pathos, as a mother worries about her NYC firefighter son, whom, we learn, did not survive.

The musical-number titles are like chapter headings: “Welcome to the Rock” opens the show and closes it in the rousing ten-year reunion in Gander, with Music Supervisor Ian Eisendrath’s super stompin’ band joining the on-stage festivities. (Violinist – excuse me, fiddler – Caitlin Warbelow is worth the price.) “38 Planes,” “Blankets and Bedding,” “Prayer” and “Somewhere in the Middle of Nowhere” are self-revelatory. There’s a thread about a couple who fall in love over the several days and later marry (again, true), and if one particular character stands out in the uniformly excellent cast, it is the American Airlines pilot played by Jenn Colella. “Me and the Sky” is a stirring anthem about her love for flying, and when Colella sings of pride at having been named Captain of a commercial airliner (in 1986) the theater erupts in cheers. 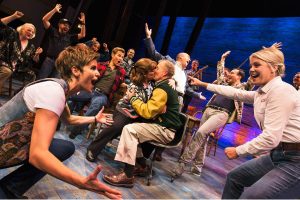 Directed by Christopher Ashley with musical staging by Kelly Devine, the show is in constant motion, with locations – plane interiors, people’s yards, etc. – evoked by simple shifts in alignment of chairs. You’re never in doubt about where you are, and for the duration of “Come from Away” you wouldn’t want to be anywhere else.

[None of the townspeople would accept any payment, but an Ohio State University fundraiser on one of the departing flights solicited pledges in a notebook for a fund that has since grown to more than $2 million. Over 250 Gander/Lewisporte high school graduates have since benefited from the Lewisporte Area Flight 15 Scholarship Fund.]