It’s said that there are only seven plots. If so, who’s sleeping with whose husband/wife/SO must be at least two of them. The details of such assignations are revealed late in “Multiple Family Dwelling,” but the vibes are unmistakable right from the start. James Hindman’s admirable one-act rom-dram about two millennial couples is world-premiering at New Jersey Repertory Company.

The adult fun (and not so much) starts at the end of eight-year old Olivia’s birthday party. Hosts Kelly (Maria Couch) and James (Dustin Charles) have offered Kelly’s long-time friend Tia (Dana Brooke) and her fiancé Stuart (Jared Michael Delaney) a good deal on the second floor of their intended-investment house, after evicting a rent-delinquent tenant to create the vacancy. 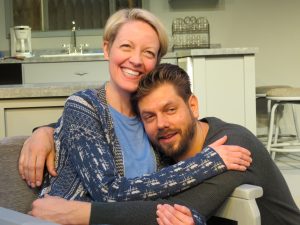 As it turns out, the upstairs is smelly, the neighborhood is iffy and the friendships are shaky, becoming progressively more so as transgressions, past and present, are revealed, first as hints and finally as cold fact. That progression is credibly written, smoothly directed (by Alan Souza) and naturally acted. The revelations may come as a surprise to the characters (and to the audience), but after-the-fact it couldn’t have been any other way.

The couples are opposite types. James and Kelly are professionals (she’s a newscaster); Tia is a hairdresser and Stuart’s a mechanic. Their concerns, however, are similar: comfortable living quarters, financial security, honesty and faithfulness to one another – same as you and me. And, like many of us, there’s an elephant in the room. Theirs is one David Shaw, both women’s high school crush, who’s still around, to the consternation of the men. (Mr. Shaw doesn’t appear, but his presence is felt.) 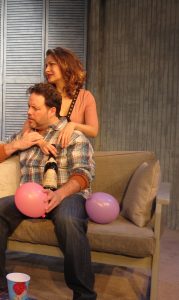 The acting is uniformly excellent. James is controlled until he’s not, while Stuart’s trajectory is the reverse. Both Mr. Charles and Mr. Delaney navigate those paths skillfully. Ms. Couch and Ms. Brooke are really in touch with Kelly and Tia; watching their scenes together (written and directed by men, btw) is like sneaky eavesdropping

In the course of the play’s 90 minutes, the tale of affairs among the four (and good ol’ Shaw) gets murkier and murkier until a combination of outing and confession clears things up and life goes on with newly acquired clarity and confidence. At least playwright Souza’s ending, which goes on way too long (a significant flaw), would have us believe that. The truth will set you free? Maybe. And maybe James and Kelly and Tia and Stuart will stay friends, (if not housemates). One can hope.