Lin-Manuel Miranda’s musical in NJ (not that one)

Before Lin-Manuel Miranda chose Ron Chernow’s 827-page biography of Alexander Hamilton to read on vacation, “In the Heights” had established him as a composer-lyricist to reckon with. Opening off-Broadway in 2007 (where I saw it twice), it graduated to Broadway in ’08 (again, once), where it won four Tony Awards, including Best Musical; the Grammy for Best Musical Show Album; and, oh yes, the Pulitzer Prize for Drama.

Last weekend I saw it again in Deal, New Jersey, where, directed and choreographed by original cast member Luis Salgado, the show fairly bursts the seams of the JCC’s Axelrod Performing Arts Center. Twenty-four super-talented performers, backed by an exciting nine-piece orchestra/band and supported by top-notch tech, make the nearly three-hours (including intermission) fly by. (There’s more to follow, but you might want to check now for tickets to one of the remaining performances.) 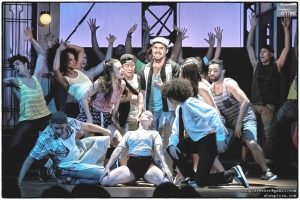 “In the Heights” cast in the opening number (Photos: Douglass Dresher)

Attention centers on Miranda’s music and lyrics, but Quiara Alegria Hudes’s book is equally outstanding. Over the course of a sweltering July 3rd and 4th, the largely Dominican-American residents of Washington Heights, Manhattan’s northernmost enclave, are depicted with all their passions, loyalties, humor and flaws. It is basically a love story – of couples and extended families for one another as well as for their neighborhood and its institutions, not the least of which is Usnavi de la Vega’s bodega.

Usnavi (Jonathan Mousset) escorts us through the story, mostly in infectious, rhyming hip-hop. Mousset is not just comfortable with the form, he relishes it; and so does the audience. The ingratiating actor makes it easy to accept that his buds Sonny (Matthew Oster) and Graffiti Pete (Joomin Hwang) are devoted to him. Also, that hottie Vanessa (Laura Lebrón) and Usnavi will end up together is a given, especially after Señorita Lebrón’s dancing and singing ignites the proceedings. 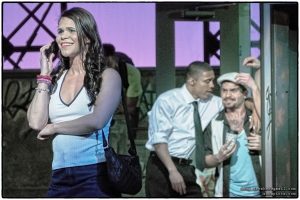 Family and social issues complicate the lives of another couple. Nina Rosario (Toms River native Elizabeth Ritacco), home from freshman year at Stanford, has some disappointing academic news for her parents; plus, her involvement with African-American Benny does not sit well with her old-school papa (a strong José Fernando Capellan). Mama (Shadia Fairuz, excellent) is more sympathetic, as is anyone who sees well-matched Ritacco and Jordan J. Adams playing the couple. Their morning-after nuzzle, highlighted by the “Sunrise” duet, brings to mind another romantic balcony scene. 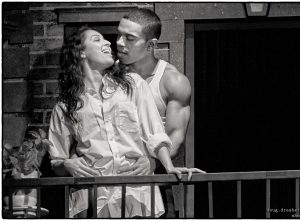 Other storylines revolve around Nina’s parent’s taxi-dispatch business; the health of neighborhood matriarch Abuela Claudia, played and sung with deep feeling by Maite Uzal; and the $96,000-winning lottery ticket bought at Usnavi’s bodega. Along the way there are atmospheric contributions by Tanya De León as a good-hearted, wise-cracking hairdresser; Danelle Rivera as Vanessa’s friend Carla; and Roberto Araujo as the Piragua (flavored ice) Guy who gets a boost when the Mr. Softee truck breaks down.

The supporting ensemble is both a cohesive unit and a group of distinct individuals. Luis Salgado acknowledges being inspired by the originals; he has adapted and scaled his direction and choreography perfectly to this cast and theater. The exhilarating “In the Heights” opening number transports you into, well, into the Heights; the ballads are emotionally secure; the dramatic laments hit home; and “96,000” animates everyone’s big-win fantasy.

Set designer Andrew D’Agostino has pretty much replicated the original, complete with the GWB in the background. (That’s praise; if it ain’t broke…) The trio of Herrick Goldman, Joel Silver and Robert Rutt’s lighting design gets a workout and comes up roses. Fred Mayo and Debra Thime’s costumes are summer-on-183rd Street-accurate.

By its nature, the show is loud, but it is not over-amplified as other shows I’ve seen at the Axelrod. With music director Walter “Bobby” McCoy’s spirited musicians in the wings rather than on the audience floor, sound designer Gerry Gironda’s balance is fine.

Minor flaws do not lessen my admiration. Yes, some of the rapid-fire rap lyrics elude the ear, apparenly Nina bought no clothes in Cali, and the second act has a few spots that could/should be paced up. But over all, this buoyant, jazzy, sensual “In the Heights” is first-class entertainment.