“All the Fine Boys” on the prowl off-Broadway

One of the two male characters in “All the Fine Boys” is well past boyhood and neither fits the definition of fine. Joseph (Joe Tippett), at 28, is, in fact, very un-fine; the other, Adam (Alex Wolff), is a harmless enough high-schooler who masks his 17-year old insecurities with delusions of grandeur (and of equally delusional sexual conquests).

The play is tucked into the Pershing Square Signature Center’s intimate Ford Foundation Studio Theatre, and although the title references the two males, it is really more about the girls they pair up with. The word “girls” is used advisedly: Jenny and Emily are fourteen. Thankfully, the actors are post-teen: Abigail Breslin (Jenny) will be able to legally order wine with dinner next month, and Isabelle Fuhrman (Emily) bade bye-bye to her teens just last month. Not being an expert on the behavior of fourteen-year old girls, I’ll suspend disbelief and accept their takes. 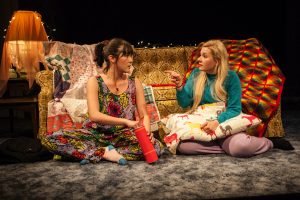 The opening scene finds Jenny and Emily in one of their living rooms, munching on Pringles and playing Truth or Dare. (The Truth query “Who would you want to lose it to?” seems aimed toward establishing age 14. It works.)

Subsequent scenes alternate between the two girls with their fellows, in separate locations, all on designer Amy Rubin’s single, spare set. (One nifty adjustment differentiates settings just enough.) Each couple’s conversation deals with issues of age and sex, a combination that provides a few laughs and some cautious making out, but also more than a few icky moments. (One scene in particular…I mean, c’mon: fourteen.) 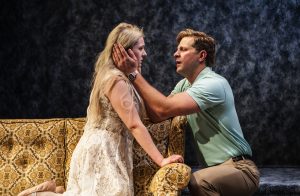 The play would also have us believe that one of the girls goes missing from home for six days without being chased down by her family or the cops, even after she has hinted her whereabouts to the other one. Yes, the 1990 setting pre-dates internet Amber Alerts, but another c’mon: Really?

It is not unintentional that more of the story is not forthcoming in these comments. While each of the girls becomes involved with one of the guys, providing too many details about who’s doing what with whom and where would be to give away whatever tension lurks in Erica Schmidt’s play. (Ms. Schmidt also directed, making her responsible not only for what goes on, but for how it’s enacted. I report; you decide.) 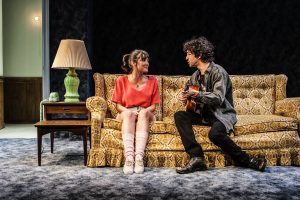 P.S. Erica Schmidt also wrote and directed the 2002 stage adaptation of “Debbie Does Dallas,” which, okay, I saw. Despite the presence of Sherie Rene Scott in the title role of the play, the movie, which, okay, I’ve seen, was better.