Tradition has it that Queen Elizabeth, enamored of Falstaff from Shakespeare’s Henry IV plays, asked the playwright for a play depicting the character in love (a likely apocryphal  ‘alternate fact’ but so what). Shakespeare did Her Majesty one better, showing Falstaff wooing not one, but two married women of means who conspire to turn the tables on their would-be seducer. Supposedly written in a fortnight on Elizabeth’s command, “The Merry Wives of Windsor” is Shakespeare’s only comedy set entirely in England and his play with the highest prose-to-verse ratio, at nearly ninety percent (no versifying Royals in this one). The play is a farcical delight.

Tinkering with Shakespeare is its own art form, and the version of “Merry Wives” at Two River Theater tests the limits of that art. Adapted and directed by Eric Tucker, artistic director of the highly regarded (and aptly named) Bedlam Theatre, the play is compressed into 100 minutes and acted by an ensemble of three performers who play all 20-some roles. 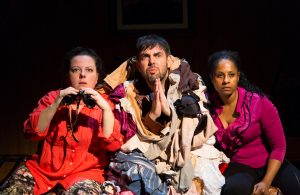 Those roles include Sir John Falstaff, who sends identical wooing letters to Mistresses Ford and Page; the Ford and Page husbands, one who also assumes a false identity; the Page daughter and her suitors; Falstaff’s cronies; various townspeople and servants. All are played by Nicole Lewis, Jason O’Connell and Zuzanna Szadkowski in rapid succession – or seemingly at the same time. (Ms. Lewis and Ms. Szadkowski each play a variety of female and male characters, while Mr. O’Connell plays only men. Something to ponder…but not today.)

Tucker’s stated intention is to “explore the darker undercurrent” of the play and still provide “lots of laughs.” No easy task that only partially succeeds. The three actors work well together, and the basic plot survives the frenzied pace, but the self-described “dark and sexy take” on Shakespeare’s light comedy and its larger-than-life protagonist does not exactly inspire knee-slapping audience reaction. The first measurable laugh at last Sunday’s matinee came about 30 minutes in – a self-conscious laugh at that, prompted by an actor grinding suggestively over the head of his scene-mate.

The necessarily fast-paced, character-change performances demand sharp timing and a disciplined approach to the script and to the staging, however loosely structured it may appear. Two River’s acting trio is generally on target, despite some anachronistic ad-libbing, loosely-structured gyrations and gratuitous toilet humor. Designer Lee Savage’s seedy motel-room set serves the play well, mounted as it is to allow for frequent quick entrances, exits and cross-overs. (There’s also a set adjustment during a blackout that deserves an enthusiastic shout-out to the stage crew!) 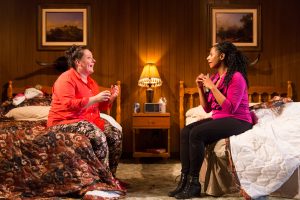 While this re-imagining of “The Merry Wives of Windsor” downplays its intrinsic comic aspects – intentionally, it should be noted – it is still entertaining enough to sit through. I’m not sure if being familiar with the play enhances or diminishes one’s appreciation of this rendering. Falstaff, for instance, is partly the adapter’s noir figure and partly Shakespeare’s deluded bumbler. (Mr. O’Connell relishes both personalities.) With minimal costume changes and mostly minor inflection variations, it’s difficult at times to discern who’s supposed to be whom, although Ms. Szadkowski is unmistakably Brook (faux Master Page) when she dons Marge Gunderson’s earflap hat…an indelible image that sets the motel squarely in North Dakota. And who knew that Mistress Quickly, who brings entrapment messages to Falstaff, was Nuyorican? A pin-point-perfect embodiment by Ms. Lewis.

All things considered, be you Shakespeare buff or not, this “Merry Wives” will be among the least taxing couple hours of your week.