If good intentions were reason enough to skew a review to the positive, “Ring Twice for Miranda” would merit a rave. With one line toward the end, playwright Alan Hruska makes his intention clear, affording a retroactive degree of admiration for the somewhat muddled content that had preceded it. (You’ll learn what line below, assuming you keep reading.) 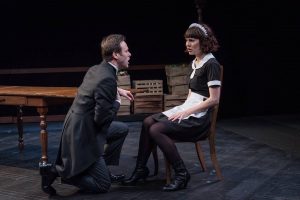 The scene is Downstairs and Upstairs (in both senses) in a house in an unnamed City, where Miranda (Katie Kleiger) and Elliot (George Merrick) are maid and butler to all-powerful Sir (Graeme Malcolm, channeling John Carradine). It is some time in the future, after a cataclysmic event or situation has transformed civilization into a dystopian state of affairs. We glean this from Miranda and Elliot’s conversation, although exactly what happened when and where remains unknown. The kitchen wall is dominated by a board with remotely controlled bells, presumably one from each Upstairs room. Two bell-rings summons Miranda, whose Upstairs duties are shrouded in mystery until near the end, and which I’ll not reveal. (“I do upstairs what I have to do,” she says. But don’t get your hopes up; while the bell-board pulls down into a bed, the prop does not live up to its Chekhovian promise.)

In unwelcome news conveyed by Gulliver (Daniel Pearce), Sir’s officious Chief of Staff, Elliot is informed that his services are no longer needed, which sends him into a panic over having to go “out there.” Miranda is welcome to stay on, but after fretting about what to take (she opts for her makeup supplies), she inexplicably leaves with Elliot into a desolate street scene with scattered trash, scarred walls and, after a while, a pair of leftover disco-era hippies: Chester (William Connell) and Anouk (Talia Thiesfield).

A discussion ensues about whether or not Miranda and Elliot can fit with their luggage into Chester’s car, which is nearly out of gas. (They can’t tie the luggage to the roof because there’s not enough rope, a detail I include because the playwright does, although there is no further reference to the rope.) 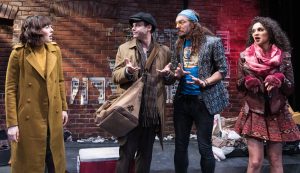 Next on scene is Felix (Ian Lassiter), a plumber (he’s carrying a large monkey wrench is how we know), who informs that the populace has devolved into cannibalism. (Adults taste like pork; babies…well, you don’t want to know.) It seems Felix was sent to bring Miranda back, where she and Elliot find that Chester and Anouk have taken their places, clothes and all. Next, Sir rebuffs Anouk’s overtures (to do what we thought Miranda was doing) and then fires Gulliver, replacing him in the chain of command with Felix.

Directed by Rick Lombardo as, I think, an exercise in existentialism, the acting is pretty much surface all ‘round, a choice dictated by the characters’ unnatural behavior rather than by acting-class lessons. When Miranda says “Our lives have been taken over by a metaphor,” Elliot responds for us all: “I should understand that?” he queries.

As neat a summary as is that exchange, the line I refer to up top is Sir’s, in response to Miranda’s blaming him for what’s happening “out there.” “I did not cause the situation,” he says. “I merely created the conditions that allowed it to happen.” Now that’s a thought we can wrap our heads around!