Thinking about Mad Love, the word “lark” popped into my head. Where’d that come from? I thought, so I looked it up in my Oxford: Something mischievous…an amusing adventure or escapade.

Marisa Smith’s play, running through November 20 at New Jersey Repertory Company, is a lark. The self-labeled “Romantic Comedy” may be “just” a RomCom, with the requisite hang-ups, but its additional descriptive “for Cynical Times” elevates it, if not out of that category, at least to its top-quality level.

Twenty-something singles Brandon (Graham Techler) and Sloane (Alex Trow) have been dating casually (sex at her place, but no sleep-overs) for a few months, after meeting at House of Brews. (He thinks he picked her up. She knows better.)  At dinner, she blindsides him with a request to donate sperm that she can freeze for insemination later (but not past when she can still rock a post-maternity bikini). At first, Brandon’s shocked refusal seems priggish, even for a middle-school teacher, but he – via playwright Smith – makes a sensible case for it later.

Brandon’s brother Doug (Jared Michael Delaney), mildly impeded from a brain injury suffered in a fraternity prank, nonetheless contributes somehow-wise and often-witty commentary, frequently verbalized in a barrage of f-words (some gratuitously prefixed), an amateurish playwright choice that enhances neither the character nor the actor. Finally, there’s Doug’s birthday present, in the person of Katerina (Brittany Proia), a Ukranian “escort” who worms her way into Doug’s affections and, more important, his confidence, before conning him (maybe) out of his prized possession.

We’ve seen these types before, but rarely as well depicted on the page and on their feet. Ms. Trow is a special treat as the delightfully animated (even when seated) Sloane, whose late-revealed dark secret, we realize retroactively, has swayed the character from the start. Brandon is a fellow of several qualities, not all admirable, but all secondary to the charm with which Techler imbues him. For a goodly portion of the play Sloane and Brandon are mutually antagonistic; nonetheless, there’s considerable chemistry between them.

Delaney rises above the grating lingo to reveal Doug’s child-like openness and vulnerability. That he also executes the intricate set changes (another triumph for designer Jessica Parks) seems somehow in character. The hooker with a heart of gold (or maybe not) may be a stereotype, but Ms. Proia fleshes this one out nicely.  Evan Bergman’s deft direction illuminates the situation and the relationships over a just-right span of ninety minutes.

The several story threads are introduced (and acted) naturally and, in one challenging example, tastefully. These are real people in compressed but believable situations. A couple of Mad Love plot developments are predictable half-way in, but one last-minute zinger is not; and it wins your heart. Factor in that you’ll learn who Napolean Lajoie was (and how to pronounce his name) and you’ve got yourself a Major League lark.

There’s an advantage to seeing different productions of the same play, as, in fact, we do if we stick around long enough. Between a plethora of revivals and periodic resuscitations (Neil Simon’s about due), it’s hardly avoidable. And of course there’s Shakespeare; in 2014 I saw four King Lears, each different from the others. The re-visits illustrate how the same words can be variously presented and also serve to instill confidence in one’s judgment (even of a first-time experience).

Of a 2010 Shaw Festival production of The Cherry Orchard I wrote that although Chekhov considered his play a comedy, “the story is melancholy in any event and here it’s very slow going,” due in large part to darkness (literally) and “…plodding direction.” It ran two hours and forty minutes (including intermission). 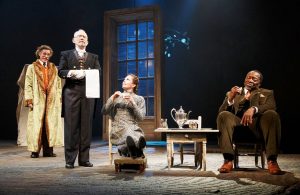 The current Broadway revival features Stephen Karam’s (The Humans) new translation and Diane Lane’s leading-role appearance. It couldn’t be more different. It’s still a melancholy situation, but you wouldn’t know it from this quasi-frenetic production, which runs a half-hour shorter than the Shaw’s.

Chekhov is not action-driven. People talk among themselves as situations and relationships develop. The Cherry Orchard begins with family members arriving home. Madame R. (Ms. Lane), facing bankruptcy, wants to hold on to her estate, with its glorious cherry orchard. A neighboring businessman suggests leveling the orchard for a resort complex, which horrifies the family. Eventually the estate is sold at auction – to the neighbor. Portending the decline of the Russian landed classes, the play ends with the household packed up and gone, the sound of axes in the orchard, and the on-stage death of faithful old family retainer Firs, played by Joel Grey, who’s not only downright peppy until the death scene, but also might be the first Firs to get entrance applause.

Despite some decent performances (in secondary roles), it’s painful to watch bulky mature actors navigate the tiny chairs in the former-nursery scene and head-scratching to observe the extended masquerade-dance scene. British director Simon Godwin’s reliance on “business” can be distracting: I defy anyone to recall daughter Anya’s speeches, delivered while she plays the cat’s cradle hand game. There’s even a Chekhov’s gun, but it’s a MacGuffin – and a weak one at that.

The Cherry Orchard is about the passage of time; this version is more like a race against time. Save yourself the couple hours.