Beginning at 8PM on Christmas Eve, you can watch the 1983 movie “A Christmas Story” twelve times in a row on TBS-TV, screening on the even hours up to 6PM on the 25th. Sans song and dance. On November 18, 19 and 20, you can see the tale played out live on the stage of the Count Basie Theatre in Red Bank, NJ. Avec song and dance. Based on the enthusiasm of the opening night audience and the reported advance-ticket sales, Phoenix Productions could probably run their own “24-Hour ‘A Christmas Story’ Marathon,” as TBS bills it.

Movie maven Leonard Maltin calls the film, adapted from radio personality Jean Shepherd’s book “In God We Trust, All Others Pay Cash,” “a delightful memoir of growing up in the 1940s…truly funny for kids and grown-ups alike!” My assessment of the musical is less enthusiastic than Maltin’s of the movie, but in this case the messengers, Phoenix’s energetic cast, transcend the message.

For the few stragglers who, like me, have somehow avoided the movie, it is essentially a series of vignettes, centering around the 1940s mid-west Parker family and on nine-year old Ralphie, who yearns for Santa to bring him a Red Ryder BB gun. Discouraged by his mother, his teacher, and even a department store Santa with “You’ll shoot your eye out,” Ralphie nonetheless receives the cherished weapon from his Old Man.

Ralphie (Tyler Sautner) with his prize possession. (We know it’s a BB gun, Ralphie, but be careful where you wave it around.)

Along the way to the [spoiler alert] eyes-intact, feel-good ending, digressions include an anti-bullying message, a pair of Old Man-chasing hound dogs (fine actors and a real treat), a malfunctioning furnace, and concern over the Old Man’s frequent profanity. There are also some 18 songs and production numbers, all well-performed by the large and generally young (some very young) cast. Humming the tunes the next morning is a challenge, but Ms. Grasso’s solo offerings, “What a Mother Does” and “Just Like That” are sweetly sung. Several production numbers highlight the show, thanks to choreographer Megan Ferentinos’s ability to get the most out of her community performers. “Ralphie to the Rescue” is a series of amusing vignettes with Ralphie and his Red Ryder carbine saving the day. 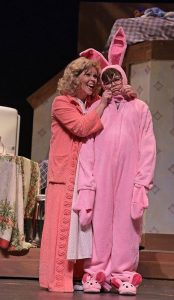 Mom (Jennifer Grasso) is amused; Ralphie (Tyler Sautner) not so much

In a sub-plot, the Old Man wins a prize in a crossword puzzle contest: a lamp in the shape of a fishnet-covered leg, which inspires a chorus of real-leg and lamp-leg high-kicks that has to be seen (and should be) to be believed. That number is great fun, as is the speakeasy tap-dance number featuring Ralphie’s teacher, played by Mikayla Petrilla, who swaps her schoolmarm persona for some real pizzazz. (A tip for the boy and girl novice hoofers: learn also to use chopsticks and to juggle tennis balls…you’ll do just fine.) Music director Andrew Macirowski keeps the ensemble in tune and on tempo; good job. 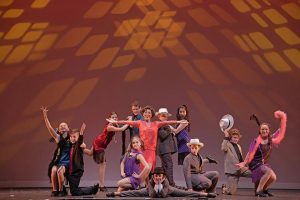 Mikayla Petrilla and the tap-dance ensemble

With one glaring – or blaring – exception, the technical aspects are fine. Ashley Cusack’s sets are excellent (especially the Parker home), as are Linda Fitzgerald’s multiple, scene-enhancing costumes (including nifty elves), and Anthony Calicchio’s lighting isolates the right areas at the right moments. But, oh my, the sound. The combination of several actors’ constantly yelling (they know who they are – and you would too) and L & M Sound’s pedal-to-the-metal volume setting renders a goodly portion of the spoken (make that hollered) dialogue unintelligible. An adjustment – on both ends – by director Todd Aikens, whose organizational and theatrical senses are otherwise exemplary, should be easy enough, putting the finishing touch on what is an early holiday season audience pleaser.

In an error of commission and omission, the program credits Philip Grecian as having adapted the show from the movie. While Grecian did author such a play (in 2000), this is not it. “A Christmas Story: The Musical” [italics mine] was written by Joseph Robinette (book), with music and lyrics by Benj Pasek and Justin Paul; it premiered in 2012. (Pasek and Paul’s “Dear Evan Hansen,” acclaimed off-Broadway last year, opens on Broadway December 4.)