The Producers has the potential to offend pretty much everyone: Jews, gays, women, seniors, prudes and the self-appointed Good Taste Police. When well staged, however, the holder of a record dozen Tony Awards (Hamilton won one fewer) replaces offense with amusement.  Mel Brooks’s adaptation of his own movie is a personal tour de force: he wrote the music, the lyrics and, with Thomas Meehan, the book.

The hit 2001 musical and the 2016 Regional Theatre Tony Award-winning Paper Mill Playhouse are a winning combination. Paper Mill is widely recognized for first-class musical revivals; The Producers joins recent-seasons Follies and The Full Monty as prime examples. (The venue is also a pre-Broadway house; Newsies and Chazz’s Bronx Tale premiered there, and The Bodyguard musical opens next month). 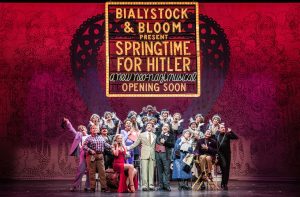 The cast of “Springtime for Hitler”: The musical-within-the-musical “The Producers”

Broadway producer Max Bialystock (Michael Kostroff) and his nerdy accountant Leo Bloom (NJ native David Josefsberg) connive to over-sell shares in a sure-to-flop musical, leaving the investors none-the-wiser and the pair off to Rio with the excess dough. They find the improbable “Springtime for Hitler” and a director (Kevin Pariseau) whose song “Keep It Gay” says it all, and who ends up playing the lead “Hitler” role. When that play is an unexpected hit, Leo runs off to Rio with Ulla (Ashley Spencer), the Swedish sexpot who had been their secretary, while Max is jailed for fraud. (Not to worry; it all works out okay.) 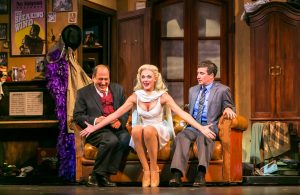 Besides the buoyant tunes and the gag-filled lyrics and dialogue, Susan Stroman’s original direction and choreography are mainstays of the show. Re-created here, Stro’s signature elements are daisy-fresh thanks to Don Stephenson (direction), Bill Burns (choreography), and an ensemble of first-class singer/dancer/actors.

Kostroff, in his seventh go-round as Max, and Josefsberg, in his first as Leo, work very well together. Distinctly different physical types, as the roles demand, they embody a latter day vaudeville team. Max’s two rapid-fire solo turns are sharply honed, and Leo’s signature number (“I Wanna Be a Producer”) is hat-and-cane perfection, as are the chorines who materialize from…well, they materialize. “When You Got It, Flaunt it” sings Ulla, and Ms. Spenser does just that. (Plus she tidies up the office during intermission!) 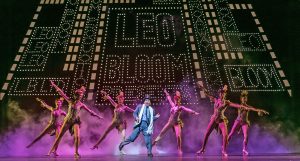 Mel Brooks’s range is broad; his targets include the biz of show biz, with all its pretensions, and, most notably, the ghost of Nazism, lampooned with surgical precision. Simply bestowing the middle name Elizabeth on Adolph Hitler, for example, is a brilliant incision.

Supporting roles are cast and played with great care, no matter how small. Jeffrey Johnson II plays two expertly; John Jeffords channels a Ziegfeld-era tenor to perfection; and Madeline Doherty is spot-on as the rapacious senior-citizen Hold-me, Touch-me (don’t ask). And oh yes, the orchestra under music director/conductor James Moore is worth the price.

One mark of The Producer ’s initial success is that the day after its Broadway opening, the top ticket price was raised from $90 to $100. Think of that! The Paper Mill production is the closest to the original I’ve seen; it runs through October 23. Just sayin’…

Through Oct 23 at Paper Mill Playhouse, Millburn, New Jersey. For (Wed-Sun) schedule and ticket info: 973-376-4343 or online at www.papermill.org