How to save the farm? Irving Berlin to the rescue!

Back in the day, I produced and performed in summer-stock musicals. They usually featured about six principals and double that number of backup singer-dancers. I like to think the shows were pretty good; the relatively un-demanding audiences certainly enjoyed them.

Those memories came back as I sat through Holiday Inn, Broadway’s latest, if dated, movie-musical adaptation. Billed as The New Irving Berlin Musical, it is based on the 1942 movie, which had already been updated on screen into White Christmas in 1954, which in turn was adapted into a Broadway musical a few seasons ago. Follow that? No matter; just know that “White Christmas” is sung in all four incarnations.

The plot is a variation on “let’s put on a show,” which harks even further back to Andy Hardy. Jim, one of the two men in a night-club trio, moves to a farm in Connecticut, leaving his former partner Ted in the now-duo act with Jim’s soon-to-be-former fiancée Lila. Turns out that the old Mason Family Farm is in foreclosure, which Jim learns as Linda Mason shows up to collect some bric-a-brac. (You’d think at the closing, but whatever.) 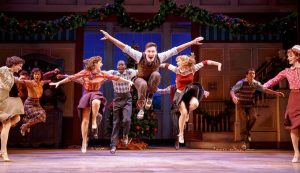 How to save the farm…hmmm…well, seeing as Jim (Bryce Pinkham) is a singer and Ted (Corbin Bleu) is a dancer and Lila (Megan Sikora) does some of each, as does Linda (Lora Lee Gayer), they put on a show! Furthermore, since they and their show-biz pals are all laid off during major holidays, they only perform during Thanksgiving, Christmas, Valentine’s Day, Easter and Independence Day – ergo, Holiday Inn! 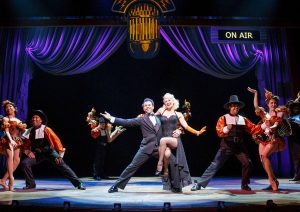 Corbin Bleu and Megan Sikora with “Plenty to Be Thankful For”

That might be a cockamamie business plan, but it’s made to order for matching up settings, costumes and Irving Berlin selections with a calendar of holidays. For Thanksgiving we get pilgrims, turkeys and “Plenty to Be Thankful For,” for Easter it’s pastels, bonnets and “Easter Parade” and so on. (If you have to ask about Christmas, you haven’t been paying attention.) 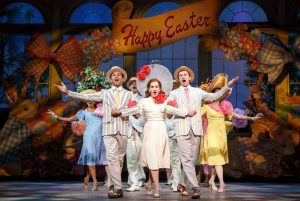 The show is mildly entertaining, in that it has its moments. The arrangements and the orchestra that plays ‘em are excellent and the ensemble “gypsies” make the most of Denis Jones’ standard choreography (a jump-rope number is nifty). Among the principals, the women fare best. Ms. Sikora, lithe and sultry, has too little to do (her appearances bookend the show), while Ms. Gayer could sing to me all day (“Nothing More to Say,” “Be Careful, It’s My Heart,” etc). The crooner Pinkham and hoofer Bleu are pleasant enough; the fact that their predecessors were Crosby and Astaire gets them a pass. Lee Wilkof and Megan Lawrence offer competent comic relief as the act’s blustery manager and the farm’s brassy caretaker, respectively, and Morgan Gao excels as a precocious banker-in-training (he’s about 12).

With Gordon Greenberg and Chad Hodge’s old-hat script, and by-the-book direction by Mr. Greenberg, this Holiday Inn would appeal, I’ll bet, to those summer-stock audiences. But on The Great White Way – and at Broadway prices? Not so sure.