The Wikipedia entry for Gertrude “Ma” Rainey, known as the Mother of the Blues, lists her life span as April 1886 to December 1939. Based on Two River Theater’s stunning production of August Wilson’s Ma Rainey’s Black Bottom, tacking on a September 2016 resurrection would not be inappropriate. With an incredibly talented (more important, skilled) cast, impeccably directed by Ruben Santiago-Hudson, the voice of one of America’s greatest playwrights has never rung with more passion or clarity. (Wilson died in 2005; another of the greats, Edward Albee, died on the day Ma Rainey opened at Two River.)

August Wilson’s ‘Century Cycle’ is composed of ten plays that explore the 20th Century African-American experience (coping mechanisms, if you will), decade-by-decade. The first to be staged on Broadway (in 1984), Ma Rainey’s Black Bottom is the 1920s entry. It is vividly outspoken on the black-white racial divide of its time. Set in a Chicago recording studio, the play progresses from routine bantering among the band members, through Ma Rainey’s tempestuous arrival and performance, to a devastating conclusion.

Despite the title, and Ma’s dominant presence once she enters (well into the first act), the principal plot centers on the band members’ interactions with one another and their dealings with Ma’s white manager and with the studio operator, also white. Bass player Slow Drag (Harvey Blanks) and trombone player Cutler (James A. Williams) are relatively easy-going (up to a point), with piano man Toledo (Brian D. Coats) being the resident intellectual. (He reads). All three establish distinct personalities, which conflict at various interludes with that of trumpet player Levee, a virtuosic performance by Brandon J. Dirden. 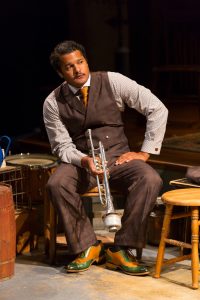 Levee is a hot-head with an ego that he stifles around “the white man”. A gruesome childhood experience, detailed in a searing monologue by Dirden (to pin-drop quiet) taught Levee “how to handle them,” but it’s a lesson upended by reality. Dirden’s Levee is by turns upbeat, angry, assertive, timid, even sexy and, lest I forget to mention, very funny. As serious as is the play’s underlying theme, the effect of white-to-black racism on its victims, the band members’ quips and jibes provide plenty of humor, a technique that the playwright mastered, lending necessary balance to the play’s harrowing aspects. (A friend wrote me that she was  gripped by an “un-erasable and haunting thought” about what Levee’s “justifiable rage” had led to.)

Ma comes in like gangbusters, trailed by her nephew Sylvester, pretty young Dussie Mae, and an irate policeman whose investigation of a fender-bender does not sit well with Ma. (“Madame Rainey,” she informs the cop. “Get it straight!”) Relishing the opportunity to assert power over her obsequious oppressors (however temporarily), Ma Rainey is a force of nature, as is Arnetia Walker, who plays the proud diva to a tee, complete with glimpses of the woman’s less-assuredness. (Walker also belts out the title song: terrific!) 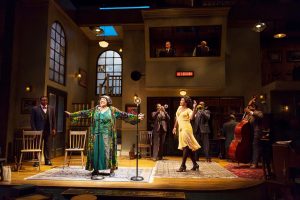 Despite nephew Sylvester’s persistent stutter, Ma insists that he narrate a spoken portion of her song. Laughing at someone’s speech impediment is hardly appropriate today (if it ever was), but as deftly played by Marcel Spears it is impossible not to.  Dussie Mae’s attachment to Ma and her dalliance with Levee reveal those three’s sexual proclivities. Chanté Adams turns the initially demure Dussie Mae into a first class vamp (it is the 20s, after all).

Michael Cumpsty gets more from Ma’s go-along-to-get-along manager than is on the page; Peter Van Wagner is just unctuous enough as the studio owner; and Bob Mackasek does a nice job as the cop.

The technical credits are exemplary. Charlie Corcoran’s multi-level set delineates the several separate areas, which the lighting design (Burke Brown) further clarifies. Sound designer Robert Kaplowitz’s synchronization with the text (and the actors) is flawless, a feat that dazzles without distracting.

The performances by Walker, Dirden et al, cannot be over-praised, nor can Santiago-Hudson’s intuitive direction. The star of Ma Rainey’s Black Bottom, however, is the playwright, a status Two River has acknowledged with superlative productions of Seven Guitars, Two Trains Running and Jitney in recent years. Now, twenty-one years after its founding by Bob and Joan Rechnitz, Two River Theater has become a major showcase for the August Wilson canon. Four down; six to go. Can’t wait.