Can this marriage be saved? (Or not?) “For Worse” at NJ Rep

There is an interesting one-act play dwelling within “For Worse,” Deborah Rennard’s two-hour, two-act play now world-premiering at New Jersey Repertory Company in Long Branch. The title derives from the wedding vows “…for richer, for poorer, for better, for worse…” and Karen and Peter Richards’s 29-year marriage is revealed to be in pretty sad shape as soon as the lights come up on their upscale Greenwich Village apartment.

Peter (Ed Kershen) has just informed Karen (Kristen Griffith) that he’s been having an affair with an art student at the gallery the couple own together. He and Lucia, who, at 26, is younger than one of the couple’s three daughters, have been involved for two years, he tells Karen (later amended to three years). 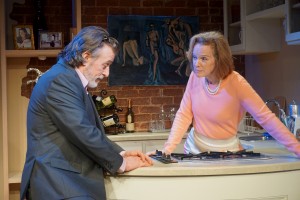 The thrust of the play, established early and re-stated throughout as if in preparation for a memory test, is that Peter expects Karen to initiate divorce proceedings so he and Lucia can ride off into the Barbados sunshine together. Karen upends Peter’s plan by forgiving him. “I’m not gonna leave you,” she declares. “We can work this out.”

Lucia (Daniela Mastropietro), at first expressing lustful impatience (in quasi-revealing black lingerie), shows up at the Richards’s apartment (decorously attired) to plead her case. By that time, Peter and Karen have each confessed to other affairs, declared both outright scorn and undying love for one another and indulged in hot make-up sex. (Throughout, sexual activity is referred to by “that” word; it becomes grating.) Then there’s an improbable scene in a hospital room with more pleading and recrimination, an out-of-the-blue speech about post-partum issues and a second sighting of gallery intern Ashley (Angie Tennant), whose brief first scene is a guaranteed predictor of her re-appearance.

Considering that Griffith and Kershen spend much of their time paraphrasing the same dialogue (“I’ve said it over and over,” admits Peter), they acquit themselves well. The situation is extreme, but, under NJ Rep veteran director Evan Bergman’s guidance, both actors play it like they believe it. Mastropietro, however, less director-restrained, over-emotes Lucia’s ultimatums in a loud, thick (Italian?) accent. And while Peter and Karen are a believable married couple, there’s nary a trace of romantic chemistry between Peter and Lucia.

The final ten minutes of “For Worse” are as satisfying as the first ten are amusing. Condensing the material that comes between into an hour or so of banter about marital fidelity, middle-age angst and sexual intrigue could produce a stage-worthy adult comedy. The topics are hardly original, but playwright Rennard puts a quirky, albeit over-stated, spin on them. An experienced actor (ten years as JR’s secretary on “Dallas”) and producer and now second-time playwright, she might want to consider the maxim that less can be more.