O’Neill’s “Hughie” on Broadway to March 27

The time stamp on “Hughie,” Eugene O’Neill’s late-career one act play, reads: “between 3 and 4 a.m.” In “Guys and Dolls,” Sky Masterson basks in “a couple of deals before dawn,” but the early morning is less kind to O’Neill’s protagonist Erie Smith, whose loneliness is exacerbated by those early morning hours.

O’Neill’s description as “the poet for losers” is personified by Erie, played with understated insight by Forest Whitaker in the current Broadway revival. The scene is the dingy lobby of a one-time respectable second-tier hotel, now a “third-class dump” (O’Neill’s words), presided over by a weary, bored Night Clerk. 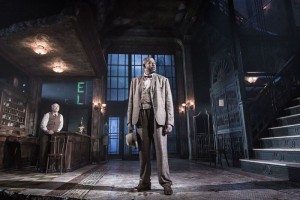 Erie comes ‘home’ to the hotel after a prolonged drunk occasioned by the death of Hughie, the former night clerk, who was Erie’s only meaningful human contact. In talking about Hughie, Erie reveals as much about himself as about the former clerk. Much of what he relates – a shared love of horse-playing, dinner at Hughie’s home – may or may not be real (they’re certainly exaggerated), but the relationship was Erie’s lifeline.

Erie vacillates between a forced hale-fellow-well-met attitude and an is-that-all-there-is funk. Whitaker captures those extremes and the stages between. In constant motion as if looking for a comfort zone in the depressing lobby, he shambles as much physically as he rambles verbally.

The play appears to be a virtual monologue and, to be sure, Erie holds forth for most of the one-hour running time, but it surely is a two-hander. O’Neill’s text includes elaborately detailed stage directions that illuminate the Night Clerk’s inner life and evoke his unspoken reactions. Impassive as he seems, Frank Wood’s presence is pivotal; you’re never unaware of when he’s listening or tuning out.

Notably, this is the first high-profile casting of a black man in the white Erie role. That it works without especial note is a tribute to Whitaker, of course, and to director Michael Grandage, but also to the continuing (and frequently re-discovered) relevance of Eugene O’Neill’s potent gifts.

Despite favorable reviews in a number of major outlets, “Hughie” will end its run on March 27, several weeks ahead of schedule. Theatergoers apparently balked at paying Broadway prices (up to $149) for an hour-long show about a down-and-out character. For those still interested – or curious – half-price tickets for the remaining weeks’ performances at the Booth Theatre on West 45th Street will surely be available at the TKTS booth in Times Square.