A Musical Revival To Love and Polar Opposite Two-handers

If you require Broadway Musical Pizzazz – brassy production numbers and high-kicking chorines – you might as well pass on “She Loves Me”. But if attractive characters, a tender love story and a melody-drenched score sounds appealing, the 1963 show (that had the misfortune to open the same season as “Hello Dolly”) might just beguile you.

Chances are it has already, in one form or another. “She Loves Me” is based on a Hungarian play, “The Parfumerie,” which has been the basis for at least three movies. First was “The Shop Around the Corner” (1940) with James Stewart and Margaret Sullavan, followed by the 1949 Judy Garland-Van Johnson musical “In the Good Old Summertime”. Most recently, the tale was updated into “You’ve Got Mail” with Tom Hanks and Meg Ryan. 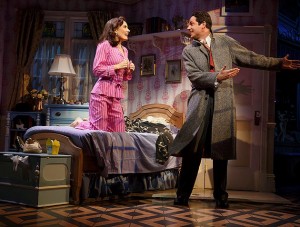 Laura Benanti and Zachary Levi in She Loves Me

“She Loves Me” is set, as was the original play, in a Budapest perfume shop circa 1930, where sales clerk Amalia Balish (golden-voiced Laura Benanti) and manager Georg Nowack (Zachary Levi) are constantly squabbling. Unknown to either, each is the other’s lonelyhearts penpal. It’s no spoiler to reveal that they end up together; it could hardly be otherwise.

The title song (“She loves me, isn’t that amazing…”) became a pop hit, but lesser-known songs, especially those sung by Ms. Benanti – “Dear Friend” and “Will He Like Me”, for two – are winning as well. Directed by Scott Ellis with respect for the period – and performed by a marvelous cast (in Jeff Mahshie’s beautiful costumes) on designer David Rockwell’s gorgeous interior set (a precious miniature made full-size), “She Loves Me” is dated, yes. But in a positive sense, it’s less a curio than a valued keepsake, and never more tenderly re-visited than in this Roundabout Theatre Company production.

To note that David Harrower’s harrowing one-act play “Blackbird” strikes a different chord is the understatement of the Century. Its jolt comes about ten minutes in, when Una asks Ray, “How many twelve-year-olds have you has sex with?”

It’s 15 years since Una was twelve, and she has tracked down Ray, now 50-something, at his (unspecified) place of business. As their respective ages would indicate, this is no ordinary reunion of two former, um, lovers. No, this extraordinary confrontation, acted with ferocious intensity by Michelle Williams and Jeff Daniels, digs deeper into its characters’ psyches in 90 minutes than many a longer play or, for that matter, full-length novel. 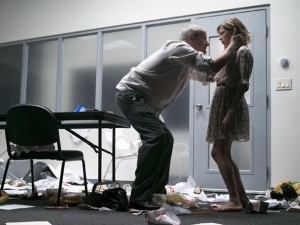 Una, in the person of the willowy Ms. Williams, is still girlish, even as she rails against the burden she has carried over the years. Denial of guilt is not an option for Ray, who served three years in jail for the offense. (The time is before there were longer penalties and sex-offender registration.)

Each character has an extended monologue in which they explain their behaviors during a seminal evening they had spent together. Mr. Daniels speaks Ray’s, in response to Una’s, with a palpable overlay of anguish. Una’s monologue is the centerpiece of the play. The pre-teen’s experience is the last thing you’d ever want to hear about, but Ms. Williams’s delivery is mesmerizing. Like the proverbial car wreck, you cannot turn away.

There is a well of emotional and justifiably theatrical heft to the play; suffice it to say that assigning guilt and the rigid judging of others is a mug’s game. Evaluating performances as marvelous as those of Michelle Williams and Jeff Daniels in “Blackbird,” however, is a welcome duty. Individually and together, they are superb.

Another couple widely apart in age inhabits “Daddy Long Legs,” at least as Jerusha believes after she’s bailed out of the orphanage where, at 18, she is the oldest resident. A certain Mr. Smith has bestowed upon Jerusha a full college scholarship and a monthly allowance of – gasp! – $35.  (C’mon; it’s 1908.) Surely the generous man must be at least 80 and bald. And probably very tall. Ergo: Daddy Long Legs.

The grant comes with the proviso that Jerusha (Megan McGinnis) must write a monthly letter to her benefactor (Adam Halpin), who will never write back. Before long, Jerusha’s letters center on her attraction to the handsome young uncle of a college friend, and if you don’t surmise from those preceding 17 words that Smitty and Unc are the same man, your powers of deduction are among the missing.

Based on the novel by Jean Webster, Paul Gordon (music & lyrics) and John Caird (book) have crafted an altogether delightful entertainment. It is one-third spoken, two-thirds sung, and three-thirds charmingly performed by real-life married couple McGinnis and Halpin.

John Caird’s fluid direction maximizes the two-person cast, while musical director Brad Haak performs the same alchemy with three musicians (himself on keyboard, Stephen Walker on guitars and, bless her, cellist Jeanette Stenson). One quibble: In one act, say 90 minutes, “Daddy Long Legs” might rate an A, diminutive though it may be. In two one-hour acts, it falls somewhat short. But hey, how many B++ musicals have you seen lately?