French dramatist Jean Anouilh (1910-1987) claims to have written “Becket” “by chance,” after reading an account of twelfth-Century English history in which some 30 pages were devoted to the story of Thomas Becket. “I had expected to find a saint,” Anouilh said, “and I found a man.”

The play portrays the relationship between Becket and King Henry II, first as carousing comrades, then, after Henry’s politically motivated elevation of his friend to Archbishop of Canterbury, as fierce opponents on the issue of Faith vs. Fealty to the Crown. Much of “Becket” is historically accurate, but it is Anouilh’s creative interpretation (and Lucienne Hill’s fluid translation) that engages one’s imagination, a phrase that aptly describes Holmdel Theatre Company’s commendable production.

Buddies at the start, Henry (Anthony Younes) and Becket (Eric Rolland) nonetheless contrast in attitude and demeanor. The King’s comradery is laced with imperious self-interest, while the sensitive Thomas is tuned in to the needs of others and to his potential for accommodating them. Neither is above debauchery, but the Royal is a heartless fellow. (Common folk of either sex are “it” to Henry.)

The actors contrast as well. Younes is taller and broader-framed, befitting the overbearing Henry. Rolland, while not diminutive, is less imposing, altogether appropriate for Becket, who grows in stature (as does the actor) as the story unfolds.  Their differences enhance the portrayals. The actors relate well to each other, both as companionable rowdies and, later, as bitter adversaries.

[A note about the opening: the actor originally cast as Becket had withdrawn only six days prior for health reasons. He was replaced by Rolland, who performed the role on book (script in-hand). Except for precipitating occasional elongated pauses, that became a non-issue early on.  The Henry actor’s command of the dialogue was already down pat; once both are up to speed (and Younes trims his eye-obscuring bangs), both roles, already impressively performed, should be even better.]

As central as are Henry and Thomas, “Becket” is not a two-man show; several supporting actors make important contributions. Mining whatever humor lurks in a serious play is essential. Michael Wurzel’s turn as King Louis of France is a gem, matched by accomplished character-actor Tom Frascatore’s sendup of The Pope. Both characters have sarcastic edges, which both actors catch just right in amusing French and Italian accents, respectively.  Another cameo has the Barons puzzling over “this Becket then, who is he?” The exchange, deftly played by Mike Sockol and Bill Normyle, would seem to indicate that Anouilh was a fan of Abbott and Costello. 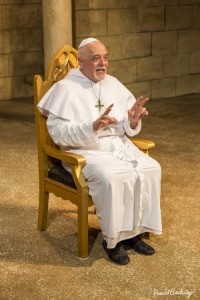 King Henry is especially nasty to his own mother, who, in Laurie Devino’s tart impression, gives as good as she gets. (Brett Sabo plays the role at some performances.) Peter Giovine impresses as a diffident young Monk who becomes Becket’s body man.

In a particularly moving scene, Henry calls in a favor by claiming Becket’s mistress for himself. Becket and Henry debate the “transaction,” but the King has his way and Gwendolen must join him in his bed chamber. “If he sends me away tomorrow,” she asks Becket, “will my Lord take me back?” “No,” he replies simply. And Gwendolen cries. Watching a real tear roll down Jessica Freeland’s cheek brought one to mine.

Steve Bartlow’s direction emphasizes relationships and the spoken word without neglecting movement, essential with audience on three sides. Chris Szczerbienski designed the set, lighting and sound, the first of which is spare, to say the least. The lighting is fine and while the sound effects work well enough, perhaps Chris can encourage some of the actors to project past their scene partners. Karen Resto’s period-style costumes compensate significantly for the absence of scenery.

“Becket” illustrates not only that being thrust into a position has the potential to define (or re-define) an individual, but also that what is seen as change is more likely the emergence of dormant character traits. (Think Harry Truman after April 12, 1945.) Jean Anouilh’s fascinating play illustrates those concepts with a flourish. Selecting the play for community production is admirable; staging it as well as Holmdel has done is icing on the cake.

Through this weekend at Duncan Smith Theater on the Holmdel High School campus, 36 Crawfords Corner Road. Fri and Sat at 8PM; Sun at 2. For tickets ($22, students $12): www.holmdelthearecompany.org