April 23 of this year marks the 400th anniversary of the death of William Shakespeare, a milestone being marked by a surge in the already generous number of productions worldwide. Queen Elizabeth I lent her name to the style of play-writing epitomized by Shakespeare. (Toss Christopher Marlowe, Beaumont & Fletcher and a few others into the Elizabethan mix.)

Less celebrated are playwrights that flourished under Elizabeth’s hand-picked successor, James VI of Scotland, who ascended to the British throne upon Liz’s death in 1603 and ruled Britain as James I for 22 years, the Jacobean period.

No history lesson is intended (or presumed), but a knowledgeable seat-mate filled in some gaps after a performance of Red Bull Theater Company’s stunning revival of Jacobean partner-playwrights Thomas Middletown and William Rowley’s “The Changeling,” running through January 24 at the Lucille Lortel Theatre in the West Village. If the play is representative of the period, and if Red Bull’s interpretations are this thrilling, sign me up.

“The Changeling” is a tale of two plots that offer different takes on similar themes and whose characters interact to some degree at the end. The principal story features Beatrice-Joanna’s relationships with three men: Alonzo, to whom she is betrothed at her father’s behest; Alsemero, with whom she is in love; and De Flores, a vile household servant who dotes on Beatrice, who is repulsed by him. De Flores is, in a way, the beast to Beatrice’s beauty.

The sub-plot involves the inhabitants of a madhouse, two of whom are feigning their infirmities in order to woo the young wife of the asylum’s much-older administrator. Also incorporating an equally smitten disciplinarian, this thread is comical. (And it is the two pretenders who figure in the plot crossover near the end.) 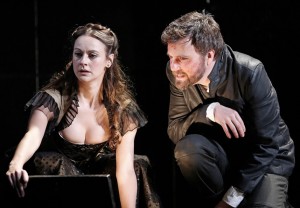 Loathsome as he is to her, Beatrice turns to De Flores to clear her path to happiness with Alsemero by offing Alonzo, an assignment he accepts in the belief that Beatrice’s virginity will be his reward. She does indeed seduce him, at least into doing her wicked bidding. Through further deceptions and dirty deeds, the Beatrice-De Flores relationship deepens right up to the play’s inevitably tragic denouement.

The entire cast, featuring several Red Bull veterans, delivers the 17th Century blend of prose and blank verse with absolute clarity. ‘Accessibility’ may be an overworked critics’ term, but when it applies to modern productions of Ye Olde English works, it is a welcome attribute. Here, not an exchange or soliloquized thought is in doubt. (Asides to the audience are particularly enlightening.)

Amidst the dozen other uniformly fine performances, Sara Topham’s Beatrice and Manoel Felciano’s De Flores are, in fact, remarkable characterizations. His skeevy overtures and her revulsion at them are palpable on both ends.

Felciano is not as physically ugly as the text indicates De Flores to be (“a creature nature framed for some use”), but he actually becomes more unattractive as the character develops. In Ms. Topham’s playing, Beatrice’s phony sweetness is downright scary. The play as written (and acted) makes sense of the oft-quoted, rarely understood maxim about love and hate being closely allied. Scenes between Beatrice and De Flores make the point. They are just as steamy when, early on, she cannot abide his slightest touch, as they are later, when…well, just later. (And some of it, dark as can be in intent, is downright funny.)

Artistic director Jesse Berger is known for the accuracy, immediacy, intimacy and dramatic impact of Red Bull’s period Theatre pieces. Based on the exciting “The Changeling,” his work will be even better known. Certainly by me.