Reason at odds in “Lives of Reason”

Suspension of disbelief refers to one’s acceptance of actions or statements in a fiction which defy reality. Stuff that would be highly unlikely to occur as portrayed or would, at least, be reacted to differently in an actual situation.

“Lives of Reason,” premiering at Two River Theater, is co-written by Robert Rechnitz and Kenneth Stunkel, novice playwrights whose combined age exceeds 160. Rechnitz is the Founder (with his wife Joan Rechnitz) of Two River, and both co-authors are former Monmouth University professors. Their first full-length play requires a major willingness to suspend disbelief – for what takes place as well as the reactions to it.

In writing about where they know, Rechnitz and Stunkel have set their play at fictional Livingston College somewhere in the Northeast. Members of the English Department are gathered at a cocktail party, hosted by Professor Andrew Hedman, a middle-aged, Swinburne-quoting, prissy mama’s-boy, played unerringly by Jay Russell. 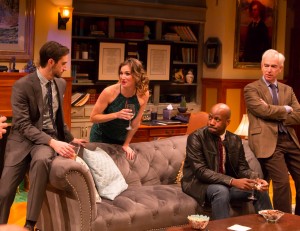 Two plots intersect during 100 uninterrupted minutes. One centers on the Deanship, with the professors vying to be anointed. While President Stein’s first choice is revealed, it is less than smooth sailing for the designee, just one of the learned gents dashed to one degree or another on the rocks of siren Ilona.

In the second thread, Ilona is desperate to re-kindle her torrid affair with Matt Livingston, who returns her ardor (and semi-clandestine smooches), but is way short of commitment. “I’m married,” he tells her belatedly, a status (his or hers) she does not regard as an impediment. 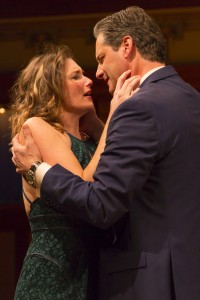 Amidst a score of literary and philosophical name-droppings, including Swinburne, of course, but also Shakespeare, Wilde, Donne, Herrick, Descartes, St. Paul and, bless them, Emily Dickenson and Elizabeth Bishop, intimations of financial and romantic improprieties enter the mix. (The parody issue of a student publication also gets a bashing. First amendment, educators?)

The play is well-acted all ‘round (including a cameo by high school senior Patrick Monaghan as one of Ilona’s flirtations). It is even-handedly directed by Jonathan Fox, who manages to corral the myriad plot points and to wrangle the large cast on the three-quarter-surrounded stage space without slighting any viewers. But the play itself and its characters strain credulity.

A vivid example of ‘suspension of disbelief’ occurs in Shakespeare’s “Cymbeline,” when bad-guy Iachimo roams Imogen’s bedchamber, taking inventory aloud, removing a bracelet from her wrist and even examining her breast (the left one is specified), all while she remains asleep. “She’d surely wake up,” is an oft-heard comment. But she doesn’t, because Shakespeare says she doesn’t.

Here, Ilona’s vituperative outbursts, her sexually-charged carryings-on, her (spoiler alert) self-mutilation and pistol-packing antics – her outright hysteria – are met with implausible restraint and even celebrated in a genteel toast. (Her litany of bizarre behavior includes the ripping up of a purportedly historical document which, if validated, would be worth a fortune.) Wouldn’t the “Lives of Reason” academics react more proportionately? Well, sure; but they don’t because Rechnitz and Stunkel say they don’t. However, when one of the characters finally states “This was an unlikely evening,” one can only agree.

Closing without commenting on Ms. Lee’s performance would be irresponsible. Ilona is over-the-top any way you choose to define that. Her outré behavior would tempt any actor to chew the scenery, and to be sure, Lee goes full out. But she’s playing Ilona as written (over-written is a valid assessment). Lee (and director Fox) have kept faith with the playwrights; Ilona is a wacko, but she’s their wacko.