YO-HO-HO! and a Barrel of Entertainment

The subtitle of “The Pirates of Penzance or, The Slave of Duty,” applies to the New York Gilbert and Sullivan Players (NYGASP), whose 40-year devotion to the Savoy Opera of its namesakes has been marked by unflagging loyalty to the works’ original intent and technique.

Fully staged productions, with complete sets, intricate costumes, a fine 25-piece orchestra and performers who re-create the period acting and singing styles, match, one imagines, the 1879 originals. Notwithstanding a few anachronistic quips (one such, “no child left behind” is an audience-pleaser), NYGASP’s “Pirates” is top-flight musical Theatre, both for immediate entertainment and for reflecting on a theatrical form whose time, long past, is well worth re-visiting.

The story: Frederic (Carter Lynch), who had been accidentally apprenticed to a Pirate King (David Wannen) when his nursemaid misheard ‘pirate’ for ‘pilot’ (as in boating), falls in love with Mabel (Sarah Caldwell Smith), one of eight daughters of a Major General (James Mills). (Here, 12 daughters, a parental burden alleviated by the fortuitous presence of an equal number of pirates.) 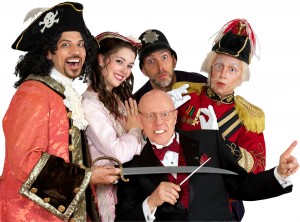 Frederic’s apprenticeship ends on his 21st birthday, the very day of the play, but when it is revealed that he was born on a February 29 and has had only five actual birthdays (“with a little left over”), his sense of duty, the satirical point of the play, binds him to the pirates until 1940! (It’s 1879; do the math.)

But not to worry. “The Pirates of Penzance” ends happily, with 12 couples united and the not-so-dastardly pirates reformed in deference to Queen Victoria – after, that is, a run-in with a Police squad, whose Keystone Kop antics I’ve previously found gratuitous. Not here; led by their Sergeant (David Auxier), they are a very amusing band of bunglers.

Mr. Lynch and Ms. Caldwell Smith, each more attractive than the other, play Frederic and Mabel’s innocence with just the right degree of…well, eroticism is too extreme, but there’s no doubting their mutual attraction. Fine singers both, their duets are exquisite. Her unfettered coloratura soars.

Imposing baritone Wannen can swashbuckle with the best of ‘em, and Mills puts the Major General’s stuffiness aside long enough to negotiate his tour-de-force number that takes rapid-fire patter to a new level. Others in the large cast are equally engaging, not least Angela Christine Smith as the former nursemaid (now the Maid-of-all-Work), the rousing Pirate and Police ensembles (whose numbers include the source strains of “Hail, Hail, the Gang’s All Here”) and the dozen lovelies who toe-dance and trill in costumer Gail J. Wofford’s most becoming pastel dresses. (Laura Sudduth’s several cameos as flighty Isabel are special treats.)

Director/conductor Albert Bergeret founded NYGASP and is the overall Artistic Director. As if that weren’t enough, he puts on a show of his own, conducting the wonderful overture with a flair infused with justifiable pride.

There’s an episode of “Mayberry RFD” where Floyd the Barber describes a Gilbert and Sullivan operetta to Goober. “It’s got a lot of ginger,” he says. Well, NYGASP’s “Pirates of Penzance or, The Slave of Duty” has a ton of ginger.

Postscript: Playwright/lyricist Sir William Schwenk Gilbert’s notorious rudeness kept Queen Victoria from knighting him at the same time as composer Sir Arthur Seymour Sullivan. (The honor was bestowed after Victoria’s death.) Gilbert died at age 75 from a heart attack after diving into a lake to save a drowning girl. The more decorous Sullivan had a 24-year affair with a married American woman. He was also the composer of “Onward, Christian Soldiers”. The original Odd Couple?