Listen up: “Spring Awakening” is back (and “VarieTEASE” will be)

The Broadway musical “Spring Awakening” broke new ground in 2006. Back on Broadway a scant six years from the original’s closing, the revival digs even deeper. The Deaf West production, imported from Beverly Hills, CA, is something special by any measure, featuring a 20-plus member cast, half of whom are indeed Deaf (capitalized, as those performers prefer). As unusual as that may appear, the play is enhanced by the concept. 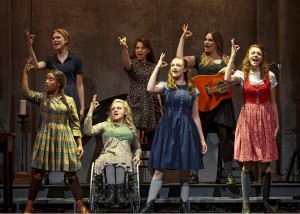 The schoolgirls of “Spring Awakening”

The principal characters portrayed by Deaf actors are ‘partnered’ by hearing/speaking/singing counterparts, with whom they sometimes interact meaningfully through looks and gestures. Book-and-lyric writer Steven Sater points out that the lyrics are not directed from one character to another, as in traditional musicals, nor do they advance the plot. Rather, he says, they function as “interior monologues [that] voice only the thoughts and feelings of each character’s private landscape.” Considering that concept, having the Deaf actor relate to his or her Voice actor adds depth to the proceedings.

Based on Frank Wedekind’s 1891 play set in a provincial German town, the musical explores the mysteries of adolescent sexuality (including same-sex), teen suicide, abortion and adult hypocrisy, all still-relevant topics. “Repressed” doesn’t begin to describe these ill-informed teens as they struggle with thoughts and feelings they’ve been conditioned to ignore – or worse, deny. 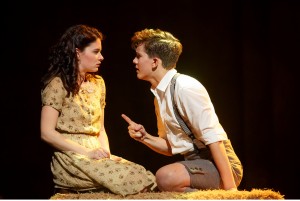 Central is the relationship between Wendla (Sandra Mae Frank), whose mother can’t bring herself to tell her the facts of life, and Melchior (Austin P. McKenzie), who knows just enough to consummate their love. They are an achingly sweet and heartbreaking couple. McKenzie, a hearing actor, signs his dialogue and lyrics as he voices them. Ms. Frank, being Deaf, signs hers (American Sign Language, ASL); Katie Boeck voices for her while, not incidentally, playing guitar. The two women are sometimes close by one another and sometimes separated across the stage. Other character pairs are similarly cast and played; after a few minutes the differences disappear into the emotional tale.

Moritz (Daniel M. Durant, voiced by Alex Boniello) is traumatized literally to death by raging puberty and the disapproval of a stern father. Moritz’s inability to respond to the ministrations of runaway Ilse (Krysta Rodriguez) is nearly unbearable in its poignancy. “All I had to do was say yes,” he laments after she leaves, consigning herself to “the trash heap.” His “yes” might have saved them both.

There is more to praise. Duncan Sheik’s music ranges from emotionally moving solos and duets (Wendla and Melchior’s beautiful “The word of Your Body”) to rousing rock-infused ensemble numbers (“Totally F–ked” is one such). The entire cast is age, attitude and energy perfect, including adults (two Deaf, two hearing) who each play several roles. Director Michael Arden and choreographer Spencer Liff have translated teen angst into more than ASL; it is universal.

It would be disingenuous to deny a particular fascination with the casting, but the reality is that if you missed “Spring Awakening” a few years ago, now’s your chance to experience it in a unique form, and if you did see it before, this production will deepen your appreciation. (You might also notice that Ali Stroker is the first wheelchair-bound person to appear on Broadway. Then again, you might not.)

At intermission, I asked the young Deaf woman seated next to me (via improvised gestures) what she thought of the show so far. After wiping a tear from her eye, she placed her left hand over her heart and patted it with her right. Me too, I nodded.

What would you expect when the woman who wrote, choreographed and directed a serious musical about patients in a psychiatric institution (“Committed”) collaborates on a show with her husband, who played an Italian neighborhood heavy in the 2010 Broadway revival of “A View from the Bridge”? A drama about the Mafia’s failure to provide health care for its members? Nope; Tricia Brouk and Joe Ricci are responsible (as in credit, not blame) for “VarieTEASE,” a musical revue that recently completed its second NYC run. (It’ll be back yet again, Tricia assured me.)

Modest by Broadway standards, the teasingly-sexy show’s style, execution and, most important, talent, add up to a perfect fit for off-Broadway’s intimate Triad Theatre cabaret on West 72nd Street. 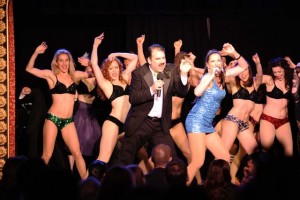 A dozen attractive performers, all doing double or triple duty, romp through musical numbers in various stages of undress (the gals and guys) and make the most of some corny-but-still-funny repartee, led by Ricci with co-emcee Candi Boyd, who looks smashing, btw, in a half-dozen bright cocktail outfits.

The opening number, “My Broadway,” is a showcase for the leggy chorines, who reappear throughout the 80-minute mini-extravaganza. Three of them (Shiloh Goodin, Heather Hamilton and Marisa Merliss) mime taking a Shower, Dressing and then The Date to an up-tempo “Flight of the Bumblebee.” It’s a synchronized gem. Ricci and Boyd’s “Who’s on First?” take-off, framed as an interview with a bawdy-house madam, is inspired: “Who gets the money?” “Every penny.” “Who does?” “Well, she’s not doing it for free!” (One negative: the sketch is too short.)

Ms. Brouk, whose choreography expands the limited stage space throughout, does her own turn in homage to Sally Rand, one of the big-three (with Lily St Cyr and, of course, Gypsy) in burlesque history. Brouk is pretty much covered by feathery fans, but they don’t inhibit one’s imagination.

The closing number is titled “Let it Go.” I’d modify that to “Let’s Go” when “VarieTEASE” announces its next play dates.