Don’t you love a play that sprinkles mysterious hints throughout about plot and characters before resolving its loose ends in the final scene? With an ending you wouldn’t reveal to someone who hasn’t seen it? You do? Then I guess you don’t have to write about it.

Brian Delaney’s “The Seedbed,” world-premiering at New Jersey Repertory Company, is such a play. Against the background of a dysfunctional family encounter, hardly an original concept, Delaney offers up an array of implications, accusations and recriminations, many of them tantalizing, none to be disclosed here. 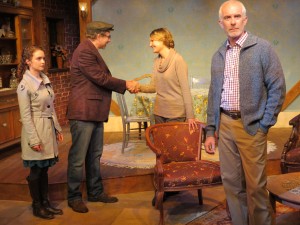 After a self-imposed exile in Holland, 18-year-old Maggie (Cathryn Wake) returns home with newly acquired fiancé Mick (Michael Louis Serafin-Wells) in tow. Certain of Mick’s characteristics are off-putting to Maggie’s parents (Gina Costigan and Kevin Hogan), and the play proceeds to examine the situation and the past from their several viewpoints. Okay, that’s not so original either, but the setting, A House in Ireland, lends a degree of freshness. It also helps explain the super-intense reactions to a situation that some, this writer included, might consider more simply dealt with. (Playwright Delaney’s Irish heritage is much in evidence.)

Among the contentious issues regarding Maggie’s relationship with her parents are the reasons for her defection and the circumstances under which she and Mick hooked up. Ms. Wake is outstanding. Maggie has something to hide, and whatever it may be is a constant just below her surface. (Being able to read her expressive face is an advantage of an intimate auditorium.) Maggie is toting a ton of baggage, but Wake keeps her free from histrionics or artifice.

The parents are in each other’s arms one minute and at each other’s throats the next. Mam (the Irish Mom) is a would-be peacemaker, doomed as those efforts are; she thinks she knows what she knows, but she doesn’t know what she doesn’t know. She’s torn between her husband and her daughter, and Costigan plays that quandary very well. The woman is sympathetic, but not for a moment pitiable. 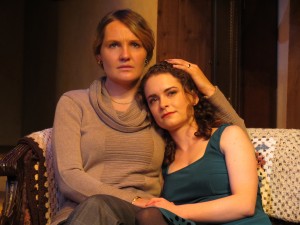 Mother (Gina Costigan) and daughter (Cathryn Wake) in “The Seedbed”

The male characters – and actors – are less consistent. Dad goes from morosely sullen to aggressively hostile; Hogan disappears into the former and segues into the latter with abrupt bombast. Mick’s charm and sense of humor (he’s a non-aristocratic Brit) morph into nastiness at the slightest provocation. It may be intentional, but as played by Serafin-Wells (in rapid-speak), he’s not a likable chap.

Like many new plays, “The Seedbed” would profit from some textual tightening. Granted, it’s an emotionally-charged situation, but stating and re-stating points of view is not enlightening. Overall, however, director SuzAnne Barabas (assisted by Adam Fitzgerald) keeps things on pace as relationships and loyalties shift through the multi-scene two acts.

We have come to expect exemplary set design and décor from Jessica Parks, and “Seedbed”’s middle-class Irish dwelling is no exception. Here, however, there’s a late-inning revelation on the premises that echoes those in the play itself. So…since we’ve withheld plot (and set) details, we’re certainly not about to give away the ending, which, while it answers some questions, poses another that remains unanswered and open to wide interpretation. Which, ironically, might be the most satisfying aspect of this attention-holding play.