Theater is a collaborative art form. While the contributions of playwright, director and actors are not necessarily equal thirds, a misstep by any one of them can mar the whole enterprise. You will go far and wait long to find a collaborative success to equal “Seven Guitars,” Two River Theater Company’s 2015-16 season opener. It is a marvel.

The very selection of August Wilson’s “Seven Guitars” gives Two River a leg up. Wilson, who died ten years ago next week, is a remarkable playwright. (The present tense “is” applies to him in the same sense as it does to Shakespeare.) His ten plays, each reflecting one 20th Century decade through the lives of contemporaneous African-Americans, comprise a legacy unlikely ever to be eclipsed. 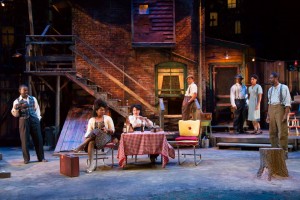 “Seven Guitars,” set as are all but one of the ten in Pittsburgh, represents post-war 1940s. The play’s four men and three women bear the scars of wartime deprivation and pervasive racism. (According to the playwright, it’s 1948, although the second Joe Louis-Billy Conn heavyweight title bout that’s incorporated into the story took place two years earlier. Poetic license.)

The plots of Wilson’s plays, like Shakespeare’s, are iceberg tips*. Attention-grabbing as they are, they are invitations to plumb the human condition. In “Guitars,” Army veteran Floyd ‘Schoolboy’ Barton (Kevin Mambo) dreams of repeating the public (if not financial) success of his hit song, recorded in Chicago after he had deserted Vera (Christina Acosta Robinson), who was left to “search my body for your fingerprints” for 18 months.

Now returned, and fresh from 90 days in the lockup on a vagrancy charge, Floyd begs Vera to go with him to Chicago, but plagued by circumstance and duplicity, his plan and his very life are doomed. (That is not a spoiler; the play is framed as a flashback from a gathering of Floyd’s friends after his funeral. The title likely refers to the seven tightly-knit characters – Floyd included – who enact the scenes that preceded his funeral.)

The play and its cast are directed with choreographic imagery by first-time director Brandon J. Dirden, whose own acting chops are world class. As written, Wilson’s dialogue is like a prelude to a symphony. The script is in ‘40s black argot (“How you gonna be going with me when I ain’t going my damn self?”), leaving it up to the actors to put the authentic spin on it (“…my DAMN self?”).

The acting is nigh flawless. Mambo gives equal weight to Floyd’s bravado, his neediness and his inability to cope with the obstacles that block his way at every turn. Ms. Robinson’s Vera is a heart-breaking combination of fragility and pre-feminist awareness.

As Louise, the landlord’s representative (a seemingly throw-away line informs that she’s not the owner), Crystal A. Dickenson tosses off the woman’s amusing sarcasm as convincingly as she enacts her innate warmth. Louise’s flirty niece Ruby is a refugee from a sordid incident in Alabama; Brittany Bellizeare balances her sensuality with compassion. Jason Dirden and Charlie Hudson III are Floyd’s harmonica and drum playing cronies Canewell and Red Carter, respectively; both are vivid characterizations. (Ms. Dickenson is director Dirden’s wife and Jason is his brother. This casting gives nepotism a good name.) 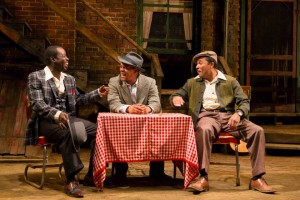 Brian D. Coats is mesmerizing as mentally-challenged Hedley, who philosophizes about his ancestry, the mighty dollar and the power of forgiveness as he blithely slaughters the makings of chicken sandwiches for his rather unsavory catering business. It is a brilliant, immersive performance.

*Consider this exchange among Vera and Louise, both having been walked-out on in the past, and newbie Ruby:
Vera: They called the dog catcher on Miss Tillery’s dog. Say she got to have a license.
Louise: He ought to have a license. That’s how you know he belong to somebody.
Ruby: All you got to do is watch where he go home. You don’t need no license for that.
This is about more than Miss Tillery’s dog.