No need to fear this “Virginia Woolf”

The last community or student production of “Who’s Afraid of Virginia Woolf” I saw was at Brookdale Community College in 1995. Since then, a Regional and two Broadway revivals (2005 and ’12), but none by locals. Lately, Edward Albee’s scalding 1962 drama has been a Community play-of-choice. Because of a serious social, economic and political atmosphere? Community actors eager to portray the demanding roles? Maybe it’s global warming. Whichever, I checked it out at Main Street Theatre Company in Parlin, NJ.

Set in a New England college town, “Virginia Woolf” focuses on the intense love-hate relationship of George (Russ Ortiz), a professor of history, and his wife Martha (Elena Marie Chalcraft), daughter of the college president, who drag new faculty member Nick (Ross Pohling) and his wife Honey (Gina Shuster) into their marital battle zone. During a boozy all-nighter, their parlor games (make that power games) are not for the faint of heart. Neither is Main Street’s admirable production, directed with pull-no-punches intensity by Leslie Hochman.

Martha is a larger-than-life character and Chalcraft, a large woman herself, doesn’t hold back. She’s coarse, blowsy and aggressive in turn, emasculating George with glee (game #1: Humiliate the Host). Chalcraft also reveals Martha’s vulnerability, her wistful neediness that rises to the surface when her guard is down. It is a layered performance. 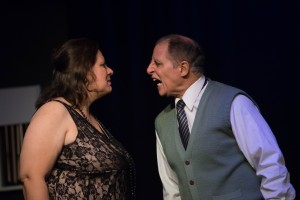 Ortiz is no less effective. Deceptively mild at the start, his George rises to Martha’s formidable challenge. To the actor’s credit, George remains sympathetic even as he lashes out at Martha and skewers the over-matched younger couple with a merciless round of his game, Get the Guests.

The appropriately handsome and fit Pohling exposes Nick’s two sides: the reserved Biology (not Math) teacher, and the ambitious, amoral cad. He’s more than ready to play Hump the Hostess, where he learns that playing a game and winning it are not the same. 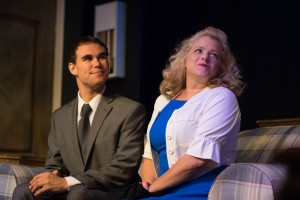 Honey is Albee’s go-to character for much of the play’s essential humor as well as a reflection of our own reactions to George and Martha’s mayhem. The original, Melinda Dillon, was Tony-nominated for Supporting Actress, losing, ironically, to Sandy Dennis, who won the equivalent Oscar as Honey in the movie. Shuster’s timing of Honey’s offbeat asides is perfect, and she accurately registers sensitive Honey’s bemusement over the goings-on, often wordlessly. In an overall well-staged confrontation scene, she’s also an amusing tipsy cheerleader (“Violence! Violence!”).

The production’s few problems include a tendency to substitute volume for intensity, and some of the longer speeches lose momentum half way through. Also, while Martha’s irreverent opening line was cut for London, where on-stage blasphemy was a no-no in 1964, we shouldn’t be deprived of that blast in 2015.

Why don’t Nick and Honey just leave the bloodbath long before they’re finally ushered out? Partly because Nick views bonding-at-any-cost as a career move; partly because leaving doesn’t occur to Honey, who “dances like the wind” through some of it anyway; and partly for the same reason you’re backed up in traffic even though the accident is across the Turnpike: they’re rubbernecking. “I peel labels,” Honey says, referring to liquor bottles. “We all peel labels, sweetie,” George replies. At Main Street Theatre, as elsewhere, “Who’s Afraid of Virginia Woolf” runs nearly three hours (with two intermissions). You won’t doze.

A footnote: “Virginia Woolf” won Tony Awards for Best Play, two Best Actors and Best Director, but was snubbed for the Pulitzer Prize. The Pulitzer judges, put off by the blunt dialogue, ignored the recommendation of the advisory jury and simply made no award. The jury resigned in protest, and Albee has won three Pulitzers in the years since.