Remember Leonard Pelkey? So do I…

A question for those who live in the Central New Jersey Shore area (as do I): Do you remember some years back the disappearance of the 14-year old boy in the Shark River-Neptune area? His hair-dresser mother and teen sister’s pleas for help and how his flamboyant behavior became an issue and suspicion grew that he’d been the victim of a hate crime? You do remember? So did I as I sat mesmerized through James Lecesne’s 75-minute recounting of the circumstances surrounding Leonard Pelkey’s disappearance.

The thing is, however, that it never happened. Playwright Lecesne made it up, with details so vivid and characters so authentic that I could have sworn I had followed the story in the press as it unfolded. “The Absolute Brightness of Leonard Pelkey” is a noir tale with 21st Century resonance, as notable for its absorbing mystery as it is for its humor, its theatricality and its deceptive simplicity.

When Detective Chuck DeSantis is approached by Leonard’s mother and his 16-year old sister Phoebe to investigate Leonard’s disappearance, he senses that “something’s off.” (“I’m a detective. That’s what I do; look for shit in the shadows.”) 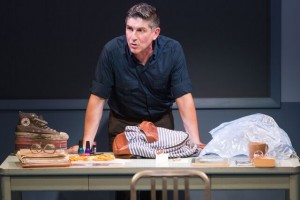 Leonard’s life takes shape through cryptic interviews with a mobster’s wife and a voyeuristic neighbor who supplies a telling clue. Also on scene are the fey impresario of Buddy Howard’s School of Drama and Dance and an elderly proprietor of a clock repair shop, both of whom seem stereotypical at first, until each is humanized by seemingly incidental details.

Playwright Lecesne plays all the characters, making “Absolute Brightness” in a sense a one-man show. But the watchful eye of director Tony Speciale and the modest show’s evocative lighting (Matt Richards) and projections (Aaron Rhyne) are essential contributors. That noted, if you don’t chuckle at the second cop’s refusal to use the intercom (he hollers), nod knowingly at the mob wife’s street wisdom (“You never know; and you never know what you never know.”), and fall in love with tremulous Phoebe, you haven’t been paying attention. Lecesne nails them all.

Is there a ‘message’ embedded in “The Absolute Brightness of Leonard Pelkey”? Well, yes. James Lecesne is, after all, founder of The Trevor Project, the nationwide crisis intervention lifeline for LGBT and questioning youth. But his play is anything but preachy. A gripping, suspenseful mystery written and acted by a master story-teller, this medium is indeed the message. Leonard never appears, and we do learn the circumstances of his disappearance at the end – just like we did when we read about it in the papers those years ago.
Extended run at Westside Theatre, 407 West 43rd Street (between 9th and 10th Aves), NYC. Performances Mon, Tues, Fri at 8pm; Wed & Sat at 2 and 8; Sun at 3pm. Tickets ($85): www.AbsoluteBrightness.com