Shaw’s “Misalliance” no misfire at Shakespeare of N J

George Bernard Shaw (1856-1950) was a man of many words. His abundance of letters, critiques and essays on political and artistic issues of his day, as well as more than 60 plays, earned him the Nobel Prize for Literature in 1925.

With a few exceptions (“Arms and the Man” is one), his plays are not frequently mounted by producing companies, especially American ones. Audiences find many of them overly talky, with verbiage trumping action, even character, and some are heavily messaged, bordering on diatribe. The trick lies in showcasing the humanity and humor while adhering to Shaw’s style and points-of-view. Easier said than done.

What a pleasure it is, then, when a Shaw masterwork is as faithful to the playwright and as flat-out entertaining as “Misalliance,” running through August 30 at the Shakespeare Theatre of New Jersey.

Shaw wrote “Misalliance” over 62 days in 1909. It is set on May 31, 1909 in the house of John Tarleton of Hindhead Surrey, England, a time and place accurately re-created in 2015 in Madison NJ. The play is idea-driven, to be sure, but as smartly directed (Stephen Brown-Fried) and energetically performed, its farcical elements keep it moving quite nicely. 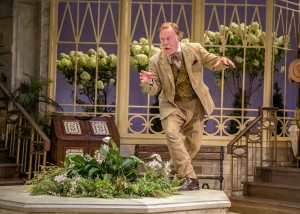 Wealthy undergarment magnate John Tarleton (Ames Adamson) and his wife, son and daughter Hypatia (willowy Katie Faber) are entertaining Hypatia’s fiancé Bentley Summerhays (Pee Wee Herman clone Matthew Sherbach) and his father for the weekend. Not only is the attraction of Hypatia for Bentley a stretch, it is further revealed in a wonderfully acted two-scene that Bentley’s father (Jonathan Gillard Daly), had also proposed to Hypatia, who delights in ribbing him: “…you’re tired of a great many things I’ve never tried.” 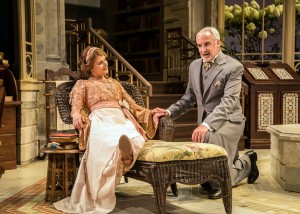 Hypatia is set to marry Bentley for his social position until an aeroplane actually crashes into the garden (more below). From the wreckage emerge a rakish pilot (Robbie Simpson) and his Polish-acrobat passenger, Shaw’s prescient feminist, boldly played by Caralyn Kozlowski. Affections are diverted, moral standards (double, of course) are questioned and secrets are revealed. The plot thickens even more when a would-be assassin sneaks in and proceeds to debunk some hypocritically espoused values (a la Shaw).

Costumed to 1909 perfection by Tilly Grimes, the cast is uniformly excellent. Sporting a glorious handlebar moustache, Adamson, veteran of New Jersey Repertory (including as the playwright in “Engaging Shaw”), infuses the family patriarch with wisdom, wit and forbearance. His Tarleton is strong and proud, but neither stern nor pompous. Ms. Faber’s performance is summed up in Hypatia’s line: “I want to be an active verb.” You really have to love some of Shaw’s women; Faber makes this one easy.

No spoilers here, but who ends up with whom is satisfactorily, if unexpectedly, resolved by play’s end. And I suppose there’s nothing more to be said. (Thank goodness!)

Through August 30 at Shakespeare Theatre of NJ, Madison. For performance schedule and tickets: 973-408-5600 or online at www.ShakespeareNJ.org

A disappointment cannot go un-mentioned. In each of my four prior “Misalliance” experiences, part of the aeroplane landed on the greenhouse section of the set. Here there is only a modest offstage crash – not even the falling debris specified in the script. The effect is muted, and while the production recovers, it’s a rare oversight by the usually meticulous Shakespeare Theatre team. (Full disclosure: I was the original associate-producer of the then-named New Jersey Shakespeare Festival; my duties did not include set design.)