Holmdel Theatre Company’s 2000 “Twelfth Night” was as good a local Shakespeare as I’d seen. Holmdel’s current production of the same play doesn’t reach that level, but it is not for lack of effort or imagination. The cast includes several young people of limited experience, and director Tom Frascatore deserves credit for moving the play along with clarity and at a reasonable pace.

Shakespeare’s own sub-title, “What You Will,” suggests that “Twelfth Night” is open to plunking its fictional country of Illyria down in any place, real or fictional, and in any time period. So noted, and largely via Karen Resto’s excellent costume design (Bobby Jones golfer outfits, argyle sweater vests and one elegant art deco dress), Holmdel’s “Twelfth Night” is comfortably settled in 1920s-30s USA. An effort to further evoke the era with songs by Jerome Kern, the Gershwins and others is less successful. Several are sung, including Cole Porter’s “I Get a Kick Out of You” and “Night and Day,” with little regard for key or pitch.

The play combines two of Shakespeare’s go-to comedy devices: A ‘trouser role’ (female-to-male disguise) and separated twins. Viola (Olivia Mullen) and Sebastian (Myles Linzey) are each presumed by the other twin to have perished in a shipwreck. Disguised as the male Cesario, Viola becomes the go-between for Duke Orsino (Tarantino Smith) in his courtship of Lady Olivia (Alicia Moeller), who is in a seven-year mourning period for her recently deceased father and brother. Viola/Cesario falls in love with Orsino and Olivia falls for Cesario/Viola. What’s a girl to do? 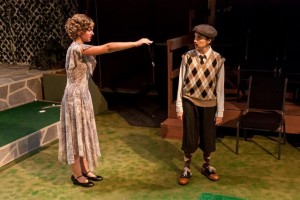 Olivia (Alicia Moeller) pressing a gift of jewelry on ‘Cesario (Olivia Mullen). If she only knew…

Meanwhile, Olivia’s uncle Sir Toby Belch (Dave Murray) plots with lady-in-waiting Maria (Brett Sabo), to dupe Olivia’s steward Malvolio (Michael Kroll), whose delusions of grandeur prove his undoing. Shakespeare makes the disparate threads clear, as does this production; the cast is comfortable with the language. It may help that “Twelfth Night” is more than 60 percent prose (vs. verse), with only “Merry Wives” and “Much Ado” exceeding that ratio, but that does not diminish the mostly amateur cast’s accomplishment. (Smith is a confident professional. He also might be the first Orsino who’s not lovesick over Olivia!)

An aura of love surrounds Viola. As Cesario, she overwhelms Olivia from the jump, and Orsino is a reluctant goner even before her true gender is revealed. The references to Cesario/Viola’s youth partly offset Ms. Mullen’s very young appearance, but masculine? Bring along your suspension of disbelief. (A fake moustache is helpful, but a touch of swagger is key to the role.) 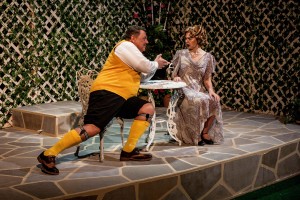 Malvolio is complex. He’s officious at the start, then tricked into being absurd, and finally, with one dark line, menacing. Kroll illuminates all those facets; his Malvolio is ultimately sympathetic. (“He hath been most notoriously abus’d,” says Olivia.) Tossing off his grim exit line for comic effect, however, dilutes the character.

Sir Toby Belch may be a notorious sot, but a falling-down drunk? C’mon; the guy can hold his malmsey better than that. He does sober up in time for Murray to mine the humor in the scenes where he baits dim-witted hanger-on Sir Andrew Aguecheek into a duel with equally reluctant Cesario/Viola. As Sir Andrew, Dan Peterson channels Leon Errol. (Google the name; it’s uncanny.) Peterson’s rubber-limbed shenanigans overwhelm the character, but no one seems to care.

Ms. Sabo is a lusty conniving Maria. Mark Piltz is cast against type as Feste, Olivia’s court jester. More like a senior class president than a clown, he nonetheless pronounces some of Shakespeare’s pithiest remarks (“Many a good hanging prevents a bad marriage”).

Others who contribute effectively include Brian Craig and Casey Woods as Viola’s and Sebastian’s rescuers. Also Wesley Swan, Christopher O’Neill and Holmdel High junior Caitlyn Manning, who makes an impression without speaking a line. And finally, there’s Linzey as Sebastian, Viola’s twin. They don’t look much alike, and he’s about a foot taller, but hey, if that bothers you, stay home. Shakespeare says they’re twins. 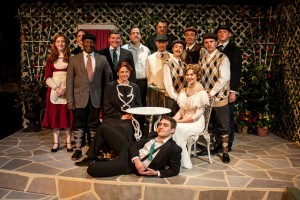