THEATREWORKS USA is a treasure. Their imaginative shows for young audiences, presented annually at the Lortel Theatre in NYC, are accessible to all, regardless of socio-economic status. In other words, they’re free. This year’s is “Skippyjon Jones Snow What,” adapted by Kevin Del Aguila (book & Lyrics) and Eli Bolin (music) from Judy Schachner’s series of Skippyjon Jones books.

In the hands of experienced professionals, theater-for-children can be a revelation; this one, the second TheatreworksUSA I’ve seen (“Click, Clack, Moo” in 2009), is a blend of song, dance and comedy, with some underlying points about ethnic and gender acceptance. It neither condescends to youngsters nor bores their adult escorts. It is, in fact, as entertaining as many shows 40 blocks uptown. 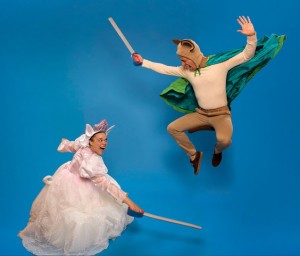 Skippyjon (Junior Mendez) is a Siamese cat with an identity crisis; he thinks he’s a Mexican Chihuahua. Emerging from his magic closet as Skippito, he’s charged by his doggy pals (Alexander Ferguson, L. R. Davidson) with rescuing a Princess (Lexi Rhoades) by outwitting a fire-breathing dragon and – ugh – kissing her. Awakened, the Princess is disappointed with his reluctance to marry and asks the bruja (“wicked witch, dude,” broadly played by Christian Perry) for another bite of the apple.

The story delights the kids, while adults are also kept in the loop with such as the kittens “hemorrhaging mittens” and Skippy’s image in a mirror being his “reflective self.” An ingredient for the witch’s brew is secured with “Lizard, lend me your ear,” and an Abbott and Costello take on the name Nieve Qué (Snow What) is perfection: “What is qué?” “Right.” And so on.

Rhythmic tunes, sprightly dances and character changes abound. “There’s only five,” exclaimed my eight-year-old grandson at the curtain call. Choreographed by Connor Gallagher and directed by Kevin Del Aguila, they are five who do the work of many.
Through August 9 at Lucille Lortel Theatre, Christopher Street, NYC.

What hath First Avenue Playhouse wrought? A play about the making of a…a…porn film? Who would go to see that? Well, I did, and apparently so are plenty of other folks. 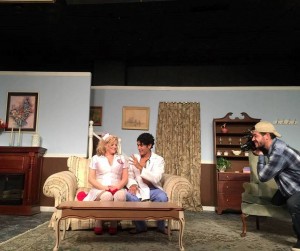 The money shot: Gina Shuster and Ankit Sharma being filmed by Dave Duncan in “Skin Flick”

There was some concern that the title would seem ‘offensive’ or ‘cheesy’, but a First Avenue insider said that people are finding it ‘funny’ and ‘silly’. The fact is, “Skin Flick” covers all four of those bases. Let me count the ways:

‘Offensive’ is, of course, in the eye of the beholder, but playwright Foster is a pro at testing the limits, and only a real prude would recoil from “Skin Flick.” ‘Cheesy’ it certainly is, but by design. Un-subtle references to the size and efficiency of both male and female body parts is hardly an art form. (They don’t show any, which is really cheesy.)

Which brings us to ‘funny’ and ‘silly.’ From the improbable start, through the zany casting and production process, those adjectives overshadow the other two by far.

There’s a sort of narration by Rollie, who breaks character to update the audience – and to censor Alex with an imaginary bleep button (a device I’ve wished for at many plays). Harris makes little effort to differentiate his character from his audience confidante, but we get the idea.

Weymann is a wily straight-woman. Her Daphne becomes an all-business film producer/director who is un-fazed by the subject matter. (She is, in fact, titillated by it, which sparks the play’s amusing ending.) Duncan makes the most of the cameraman’s sleaziness, although he does it at a daunting dialogue pace.

Shuster and Sharma sounds like a comedy team, doesn’t it? Different in types – she’s curvy and fair-skinned, while he is slender and dark – they shed their inhibitions and wring the physical humor out of an absurd situation, But hey, if they weren’t comfortable playing it, it would be uncomfortable to witness, which it is not. They are troupers – and very funny together.