Who was that man walking along Monmouth Street in Red Bank at 11PM last Friday singing Supercalifragilistic… and eliciting smirks from the smokers outside Buona Sera? Well, if you must know, it was me, and it wasn’t just the song from “Mary Poppins” that had me singing; it was the whole shebang that I had just seen at the Count Basie Theatre.

Despite a flaw or two that will escape mention here, the Phoenix Productions “Mary Poppins” is a delight. The 50-member (!) cast is uniformly excellent, thanks to producer Lindsay Wood’s first-rate creative team. Directed with attention to detail by Keith Gissubel, musically coordinated without a hitch by Andrew J. Macirowski and choreographed to the tippy-top of every performer’s ability by Kelly Gemellaro, the show ranks with the best I’ve seen in two decades of covering Phoenix.

With her parrot-head umbrella and bottomless carpet bag, Mary Poppins arrived in 1934, in the first of eight P. L. Travers books about her. She was further immortalized by Julie Andrews in the 1964 Disney movie, and then on stage in the 2004 West End musical that opened on Broadway in 2006, logging 2,619 performances over six-plus years. (The Phoenix run of six performances over two weekends, one already past, seems out of proportion to the preparation work and hardly fair to potential audiences. Just sayin’…)

The books and the musical contain more serious aspects than the bubbly-light movie. There’s more substance to the Banks family, an element that’s portrayed well in this production. Take-charge nanny MaryPoppins (the name morphs into one word) passes her brief interview with Mrs. Banks (“Or I did,” says Mrs. B) and wins over the children with a combination of fair discipline and unmistakable affection. Katherine Le Fevre’s Mary wins over everyone in attendance, staking her claim with her first song, “Prac-ti-ca-lly Perfect,” which pretty much describes her entire performance. Somewhat constrained by the period costumes, a 1900 hazard, she nonetheless moves with grace, articulates with charm, and sings like the proverbial lark. “A Spoonful of Sugar” isn’t too sweet (your teeth don’t ache), “Chim Chim Cheree” is mighty catchy and Ms. Le Fevre’s intro to the rousing Supercali… number paves the way perfectly for that show-stopping joy-fest. 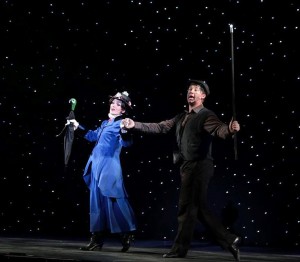 Mary and Bert by starlight

As Bert, Mary’s platonic significant other, Bobby Davis is a Bobby-of-all-talents: setting the scene, schmoozing with Mary or gamboling in the park, the droll comic actor and spiffy dancer is a scene stealer. He heads up “Step in Time,” the second-act ensemble song-and-dance that nearly blows the roof off the Basie.

The Banks family is a believable unit. Bob Brown personifies the emotionally inaccessible father who eventually comes ‘round, while Patricia Delesky makes the emotionally starved mother worth coming ‘round for. (The character is a budding feminist, a nuance Ms. Deleskey plays perfectly.) As the children, Taylor Carpinello and Jack Sweeney are making auspicious Phoenix debuts – fine young performers, both.

Other impressive contributions include Joan Schubin as a nasty nanny who briefly replaces Mary, Ruthie Zekaria Levy as the Bird Woman in the park, and a half-dozen poised statues that come to life. The singing/dancing ensemble – average age about 20, I’d say – is a totally engaged and engaging group of stage gypsies. Technical elements are praiseworthy as well: Ashley R. Cusack and Tom Martini’s sets and Anthony Calicchio’s lighting contribute nicely, as do the outfits from Playtime Costumes. State-of-the-art speaker towers enhance Lou Mannarino’s sound design.

Finally, some of you might be wondering if MaryPoppins arrives or departs through the air? The answer is in the program credits – three words that have buoyed the hearts of theatergoers for years: Flying by Foy. ‘Nuff said.