The roster of the 870-or-so Tony Award voters (the number varies) includes the boards of Actors Equity, the Directors and Choreographers Society, and the Association of Theatrical Press Agents and Managers. Only Broadway productions (40 eligible theaters) are considered, and some voters have vested interests in performers and/or eventual touring companies. Excellence usually prevails, however, due in large measure to the quality of the nominee pool, never more in play than this year. Following are my thoughts on 15 key categories (out of 24 that are voted):

Best Musical
“An American in Paris” is a lovely ballet-centric enterprise; the timely message of “Fun Home” (about gender-acceptance) has limited general appeal; “The Visit” is downright gloomy. “Something Rotten,” a blockbuster with prolonged cheers for mid-show numbers, is the likely winner. (Can’t count out “American in Paris”.)

Best Play
Nominees “Disgraced,” “Hand to God,” and “Wolf Hall Parts 1 and 2” were all well received, but only “The Curious Incident of the Dog in the Night-Time” received unanimous raves. Its unwieldy title will be oft-heard on the June 7 telecast.

Best Leading Actor in a Musical
A toss-up between theater-insider favorite Brian D’Arcy James for “Something Rotten” and song-and-dance man par excellence Tony Yazbeck in “On the Town.” My preference is James, but Yazbeck has already been announced for the national tour, which brings vested interests into play. (Can see the out-of-town ads: “Starring the Broadway Tony-Winner”.) 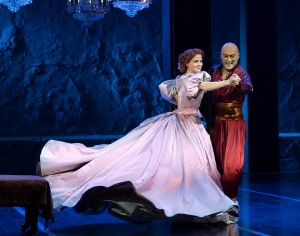 Kelli O’Hara and Ken Watanabe in “The King and I”

Best Leading Actress in a Musical
In a talent-laden category, my bet’s on Kelli O’Hara for re-defining the role of Anna in “The King and I” and for having been nominated five times previously without a win (four as Leading and one Featured). Kristine Chenoweth sparkles in “On the Twentieth Century,” but as Charlie Malloy told his brother Terry, “Kid, this ain’t your night.”

Leading Actor in a Play
In his professional stage debut, young (25) Alex Sharp plays a younger (15) autistic lad who negotiates a perilous journey from Swindon, England to London after the discovery of un-delivered letters from his absent mother. Also involving the suspicious death of a neighborhood dog, “Curious Incident” is as gripping a whodunit as it is a family drama, and Sharp is really…sharp.

Leading Actress in a Play
This is close to a birthright: Helen Mirren in “The Audience.” Her Queen Elizabeth II is a miracle of representation-without-imitation. (“Skylight”’s richly deserving Carey Mulligan will likely contend in roles to come.)

Featured Actor in a Play
Among six nominees, two stand out in my memory. Alessandro Nivola could win for “The Elephant Man,” but my guess is Broadway-debuting Micah Stock, hilarious as the coat-runner in the otherwise star-driven “It’s Only a Play.”

Featured Actress in a Play
Fresh from her breakout turn in “Kinky Boots,” Annaleigh Ashford was captivating as the inept ballerina in “You Can’t Take It With You.” She deserves this Tony (as if playing James Earl Jones’s granddaughter weren’t reward enough).

Featured Actor in a Musical
All four nominees are worthy, but only one left an indelible impression on me: Christian Borle plays Shakespeare as a devious hipster in “Something Rotten.” The role is as close to “leading” as a “featured” can be, which doesn’t hurt his chances.

Brian D’Arcy James, left, as Nick Bottom (not that one) and Christian Borle as Shakespeare (that one) in “Something Rotten”

Featured Actress in a Musical
Who knew that Wife-in-Chief Lady Thiang was as complex a woman as Ruthie Ann Miles makes her in “The King and I.” Her “Something Wonderful,” which I’d considered apologetic, is here a staunchly loyal defense of her King. She’s up against critical favorite Victoria Clark (for “Gigi”), but breathing new life into an old role should be an Award of its own. 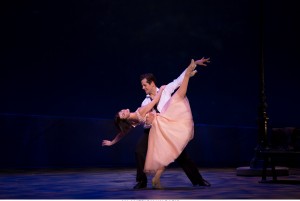 Leanne Cope and Robert Fairchild in “An American in Paris”

Best Directors (Play & Musical) and more…
Beating out Marianne Elliott for directing “Curious Incident” would be a major upset. The musical director Tony, though, is a tougher choice. While it most often coincides with best overall musical (my choice “Something Rotten”), I’m predicting dark horse Bartlett Sher for “The King and I,” which will likely win for Musical Revival in a close race with “On the Town,” whose choreographer Joshua Bergasse is either-or with Christopher Wheedon (“An American in Paris”) for the Choreography Tony. And tossing one more into the mix, my pick for Best Play Revival: “You Can’t Take It With You.”

After you parse that admittedly convoluted paragraph (or give up on it), be sure to put the 2015 Tony Award telecast on your calendar. Sunday, June 7 at 8PM on CBS-TV.