“The Realization of Emily Linder” in Long Branch, NJ

Emily (Marnie Andrews), invalided from an affliction that necessitated the amputation of her toes (diabetes?), announces to her daughters Margaret (Dana Benningfield) and Janet (Corey Tazmania) that she will die on Friday morning. It is neither a diagnosis, she tells them, nor a prediction. It is a realization, and she has drawn up a list of requirements for her funeral, among them helium balloons, a levity-free eulogy, Uncle Alex excluded from attending, and, um, her loose toes buried with her. 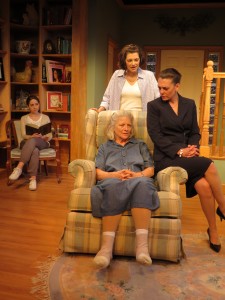 Emily is incapacitated, yes, but presumably only until she’s able to perambulate toeless. (Maneuvering her from wheelchair to recliner and back becomes a plot point.) Margaret, needing to get back to her family, and Janet, a Chicago power-attorney, decide to humor mom by complying with her particulars. (Janet has brought along an assistant, Jennifer (Jenny Vallancourt), who goes on to serve a pivotal function.)

That’s the surface of the play. Simmering underneath is a theme of conflicting family values, exacerbated by the sisters’ clashing personalities and their relationships with mom, who seems to favor one over the other (unlike you, reader, who holds each of your children in exactly equal regard). I am not alone in my admiration for the cast. I mentioned to a woman at intermission that I believe sisters to be the closest bonded of all relations. She agreed, noting that these two, as played, project that closeness despite their “unresolved issues” (a cliché, but never more apt). As their characters require, Benningfield exudes emotional reality without lapsing into melodrama (her tears are genuine), and Tazmania’s devilish, take-charge Janet is tough and insecure in equal measure.

The daughters are matched by mom. Andrews embodies the woman with a tenuous grip on reality. Her acceptance of her impending demise as simple fact spills over into the audience, enhancing our immersion in the family dynamics. It is also the source of much of the play’s considerable humor. As different as the three actors may be in appearance, one never doubts that the three characters are mother and daughters.

Then there’s Vallancourt’s Jennifer, who sits quietly reading Marcel Proust’s “Remembrance…” (in the original French, of course), until called upon to inject order into the proceedings. Jennifer’s – and Vallancourt’s – strengths, having been held in reserve, end up serving the play.

Whether or not Emily’s realization comes to pass will not be revealed here, and pointing out that the ending is overly tidy risks annoying its admirers, of whom I suspect there will be many. But it is. Out-of-the-blue revelations from unexpected sources might be a way to tie up loose ends, but ultimately it is a weak device.
What is anything but weak is the immersive acting by what I’m dubbing “The ‘Emily Linder’ Four.” Go watch them at work.