Giggin’ with a Jazz Great

[This memory was triggered by a recent New York Times obituary. Renowned jazz pianist Marty Napoleon died on April 27 at age 93. Marty broke in at age 20 with the Chico Marx Orchestra (featuring 16-year-old vocalist Mel Torme) and went on to play with such as Benny Goodman, Gene Krupa, Charlie Barnett and Buddy Rich. In 1952 Marty joined the Louis Armstrong All-Stars, remaining through Satchmo’s final performance at the Waldorf-Astoria in 1970. During those years, Marty also led his own small group. For one day in the early 1960s, I was a member of his group. Sort of.] 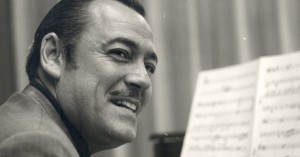 A Screen Actors Guild member in the 1960s, I had registered with various NYC casting agents, among them Bernie Styles, who specialized in placing extras and “special business” actors in movies and on TV, jobs that were valued not just for the day’s pay (then about $50-$150), but for credit toward unemployment compensation eligibility. All possible skills and talents were listed on our resumes; mine included playing cello, which I had studied in high school. (I later had a recurring role as a cellist in a William Shatner TV series, but that’s another story.)

One Wednesday morning in 1963, Bernie Styles called me at home (in Elmhurst, Queens). “You play the bass, right?” he asked. “Right.” (He could have asked if I played the harpsicord.) “And you’re a smoker?” ”Right.” (A requirement to appear in a cigarette commercial, this one was true.) “Be at [long-forgotten midtown address] in a suit at 8AM tomorrow for a Spring Cigarette commercial.” To say I was pleased is wildly understated. Then, “Bring your bass” and he hung up.

I had never even played the bass, never mind owning one, but not to be deterred, I picked up a bass from an instrument rental agency in Flushing, not noticing that there was a hole near the bottom of the side-panel. I called around and located a Queens Boulevard night club with a bass player in that night’s band, where I showed up at 10PM and told the bass player I had an audition for the role of a bass player (not an actual gig). By midnight I was sitting in on a couple of key-of-C tunes.

The next morning, at the TV studio, I was directed to the “talent room,” where, what to my wondering eyes did appear, but a piano at which sat a man I had seen in similar poses many times before, including at the 1958 Newport Jazz Festival (which I had reviewed for the Cranston, Rhode Island Herald). Marty Napoleon was to lead the Spring Cigarette band that included Sonny Stitt on sax, a trumpeter whose name I do not recall, drummer Panama Francis, who was later in the original Broadway cast of “Marathon ’33” (as was I), and, um, me.

Bernie Styles hadn’t intimidated me, but these guys surely did. Nonetheless, when Marty Napoleon suggested we run through the tune (it was to be recorded live), I unwrapped my holy rented axe and found the first note on the sheet. “One, two, two, two…” and we were off. Hey, I thought, plucking away, this isn’t so hard. I even managed to end with them. 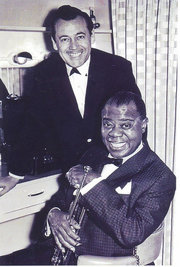 Marty Napoleon and Louis Armstrong, circa 1956

Marty gave some notes, like “maybe lag behind the beat” to the drummer. Then: “Bass player [pause], take it up an octave and lay out.” My cover was blown. Thankfully, after some questions (and some good-natured digs), they let me slide. “Just look like you’re playing,” Marty instructed. “Keep the hole off camera, and do not let your fingers touch the strings.” So…I completed my phantom gig, shook hands all-‘round and went home. Which would be the end of the story, but for this:

Flash forward 25 years to a Sunday in the mid-1980s. I’m married, living in Ocean Township, NJ and see that Marty Napoleon is appearing at the Toms River, NJ library. (It should be noted that the above tale had been oft-told and only quasi-believed.) So…off to Toms River, only to discover the auditorium full and speakers set up in an ante-room so the overflow crowd could at least hear the piano. Tres disappointing.

Waiting among the unseated, I spy Marty Napoleon making his way through the crowd; “Marty” I call out, like an old friend (or band mate). “You wouldn’t remember me, but I played bass with you in a Spring Cigarette commercial in the ‘60s.” I would have gone on, but it was unnecessary. “God yes,” he said. “The non-player with a hole in your bass…on a Bernie Styles gig, right?” He remembered! Was I pleased? Duh.

Marty had chairs placed near the piano for us and we spent some time after the concert reminiscing and filling in the gaps. On the ride home, my wife broke my reverie: “Well, I’ll be damned,” she said. “Okay, that releases another half-dozen hard-to-swallow tales from the ‘unbelievable’ lockup.”

So now, here’s the one about…