David Ives is a word-wizard. More sublime playlets than several of the ones from “All in the Timing” have yet to be written. The only ones that even come close are Ives’s own, like those that comprise “Lives of the Saints,” running through March 27 at The Duke on 42nd Street.

Like “Timing,” “Saints” is three short plays in each of two acts. Three of these six are world premieres, two others are NYC premieres and the titular sketch, “Lives of the Saints,” is reprised from its bow in 2000. Ives sets an amazingly high standard in the best of them, which sparkle with his unique imagination and off-kilter wit. He turns situations and relationships on their heads; casual interactions escalate into complexity, and fantastical circumstances become the ordinary.

In “The Goodness of Your Heart,” after one friend thanks another for some valuable business advice, the other suggests he be gifted with a flat-screen TV. Not as a quid pro quo, mind you; it’s just what friends do. They don’t sell or loan ‘stuff’ to friends; they give ‘stuff’ to friends. The sketch is a text-book study of a taker-giver relationship. It is very funny, if a little scary. 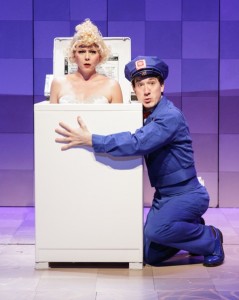 “Soap Opera” is a parody of the Maytag Repairman TV commercials, a redundancy for sure. The long sketch is built around a humanized Maypole washing machine and laundry-themed puns (a dryer gives the washer a tumble). It has its moments, but it’s the labored entry of the six. (Amusing photo, though, right?)

“Enigma Variations” has two Bebe Doppelgangers complaining to two therapists. “It’s as if I’m a double with a singular problem.” The diagnosis: “You have a German name and a French disease – déjà vu.”  The dialogue is perfectly synchronized, some at warp speed. A pin-point take on a quirky disorder, perfectly performed. 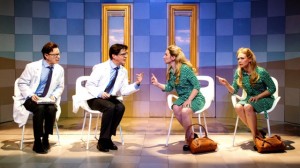 After being declared dead by a nonchalant attending doctor, Toby’s mother exhibits “Life Signs,” disrupting his and his wife’s well-ordered lives. (Wouldn’t it yours?) Imparting secrets from the hereafter, she reveals her own indiscretions and, worse, those of her daughter-in-law. The concept is outrageous. So is the language. So is the comedy.

Two roads diverged in a yellow wood/and sorry I could not travel both… That’s Robert Frost, of course, but it might be the sub-title of the most intense sketch of the six. “It’s All Good” has author Stephen bidding his wife goodbye as he leaves for a book-signing in his old home town. Will he look up former girlfriend Amy? Can Ives create a scenario that lays out what might have been had Stephen stayed put? Well, duh; fifteen minutes here puts the similarly themed Broadway musical “If/Then” to shame.

Kelly Hutchinson, left, and Liz Rooth in “Lives of the Saints”

Saving the best for last, the show closes with the title work, about two elderly women preparing a “funeral breakfast” in a church-basement kitchen. Little can be told without spoiling the piece’s delicious surprise. The concept is poignant; the staging is clever; the acting superb. It’s a fitting wrap to “Lives of the Saints” that sends you out of the theater on a heavenly high.

Note: Under the Ives-centric direction of John Rando, each of the highly skilled, versatile actors appears in several roles. All five are pictured above.