“On the 20th Century” isn’t exactly an old dog, but fitted out with some new tricks, one in particular, the current Broadway revival is a snazzy affair. That one indispensable element is the glowing Kristin Chenoweth. In the role created by Madeline Kahn in 1978 (replaced after only two months by Judy Kaye), Chenoweth is magnetic. From two-scenes to ensemble numbers, you cannot take your eyes off her. 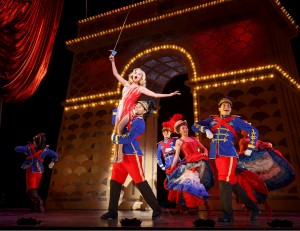 Kristin Chenoweth aloft in act one of “On the Twentieth Century”

Adapted from an earlier farce, most of the action takes place aboard the Twentieth Century Limited (um, a train) on its run from Chicago to New York. Among the passengers are down-on-his-luck producer Oscar Jaffe (Peter Gallagher) and his former flame, movie star Lily Garland, nee Mildred Plotka (Chenoweth), whom Jaffe hopes to sign for his Broadway comeback. Also along for the ride are Lily’s current squeeze and a host of passengers who burst into song at the slightest provocation.

While none of the 20-plus numbers is particularly memorable, Cy Coleman and Betty Comden/Adolph Green won Tony Awards for their respective score and book, as did both male leads. The nominated Kahn was overlooked and, curiously, the show lost Best Musical to “Ain’t Misbehavin’,” a show with no book or original score.

Classing it up in act two.

“Twentieth Century” is fueled by Chenoweth’s perfect performance. Entering in flashback as a dowdy audition accompanist, she segues into her brassy first-act production number, “Veronique,” eclipsed only by the stylish “Babette” in act two. Along the way, her Lily is alternately demure and demanding, but glamorous throughout in Chenoweth’s spritely fashion. (Fashion? William Ivey Long’s art-deco costumes are a show in themselves.)

A loony faux-millionairess sub-plot is silly, and there’s never any doubt about Lily and Oscar’s reconciliation, but there are other pluses. Fine baritone Gallagher hams up the impresario in classic style; a spiffy quartet of railroad porters tap-dances the entr’acte; and Andy Karl, last season’s “Rocky,” is amusing as Lily’s narcissistic boyfriend.

For all its top-notch production values, David Rockwell’s excellent multi-compartment set among them, it is Kristin Chenoweth’s show. Diminutive in stature, she’s nonetheless a Leading Lady to contend with. Her character’s star quality is never in doubt, nor is Chenoweth’s own.

Larry David is a lousy actor – make that non-actor – but he’s the best of all possible Larry Davids, and despite the plethora of nay-sayers, “Fish in the Dark,” his on-stage sitcom, is funny. Okay, not every-single-line funny as his fawning acolytes would have it, but generally sharp-edged and expertly delivered. David makes no attempt to step away from his own persona, and his play is well-worn shtick about a squabbling extended Jewish family; but I laughed at three-quarters of the gags (and there’s a ton of ‘em). 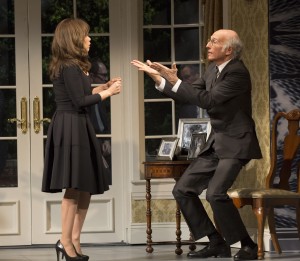 Larry David with Rosie Perez, as a maid whose son is revealed to be…well, you have to be there.

David’s timing, and that of the other 17 cast members (huge by straight-play standards) is spot-on. He wrote the play and stars in it and while he’s reputed to be ego-driven to a fault, the funniest line in his play is given over to Jayne Houdyshell, playing the character of David’s mother. Make of that what you will.
Cort Theatre, 138 West 48th Street, NYC. Telecharge.com or 212-239-6200.